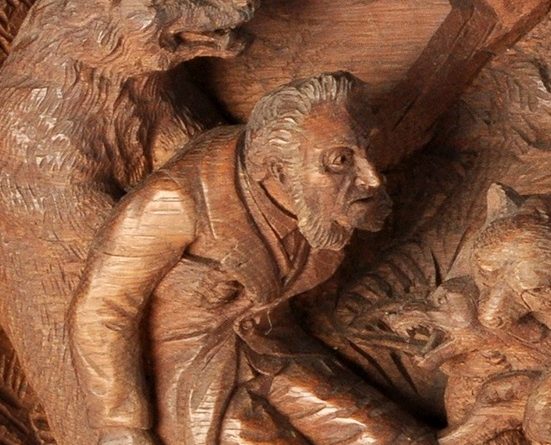 A rare signed ornate panel by celebrated North East Victorian carver Gerrard Robinson, which is believed to have been in the same family for more than 130 years, is set to be one of the highlights of the forthcoming Anderson and Garland Fine Arts sale. 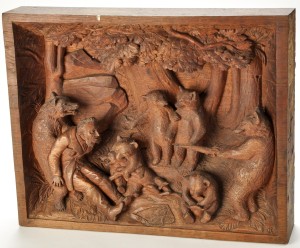 The carved oak deep relief panel, which measures 54cm x 44cm x 10cm and shows a family of bears holding a hunter and his dog at gunpoint, will go under the hammer in Newcastle during the three-day sale from September 15 to 17.

Newcastle-born Robinson is famed for producing extraordinary carved cabinets during the mid to late 19th Century, first for Grainger Street-based Thomas Tweedy  and then under his own name.

His intricately carved subjects ranged from Derby Day and Shakespeare to the Robinson Crusoe sideboard (now in the Shipley Art Gallery), and the Chevy Chase sideboard – considered to be his masterpiece – which was sold to the US. The Laing Art Gallery staged a major exhibition of his work in 1991 to mark the centenary of his death.

The hunting bear family panel’s providence can be traced back through vendor Linda Hunter’s family to the 1880s, when her great-grandfather James Taylor was working as a cabinet maker and joiner on Tyneside.

She said: “The story goes that when James was doing some joinery work for Gerrard Robinson, he was given the carving as payment. So we think the carving has been in the family since round about 1881. We had heard about the story of the wood carving from our grandfather Ernest Taylor. We found the carving when we were clearing out the loft of our uncle/grandparents’ house.”

The family also has a portrait of James Taylor painted by artist Ralph Hedley, who was known for both his painting and his wood carving work. Miss Hunter said: “Our grandfather always said that his father had done some work for Ralph Hedley and had his portrait painted by him.

“Gerrard Robinson and Ralph Hedley were both at Thomas Tweedy’s carving business in Newcastle upon Tyne.  So we wonder if there is a connection with this and our great-grandfather.”

Pieces by Robinson rarely come on to the market and the panel is estimated to sell for between £1,000 and £1,500.

Anderson and Garland auctioneer, Fred Wyrley-Birch said: “Robinson did work commercially but his work comes on to the market very, very rarely and is rarely signed. This piece is signed with a monogram.

“There is a fantastic following for his work and we are expecting interest from furniture collectors and interior designers. The Laing Art Gallery has a massive Robinson carved scene and the Robinson Crusoe sideboard is on display at the Shipley. Institutions like these may also be interested.”

The Fine Arts auction will also be selling a rare photo of Captain ES Godfrey, who survived the famous Battle of the Little Big Horn in 1876. Godfrey commanded Company K during Custer’s last stand. The 11cm x 17cm photo is inscribed on the reverse with ‘Edward Godfrey 1889, Fought With Custer’.

Mr Wyrley-Birch said: “Godfrey is a fascinating character and this is a rare piece of American history. We’re expecting interest online from abroad for this lot, which has an estimated value of £200 to £300.”