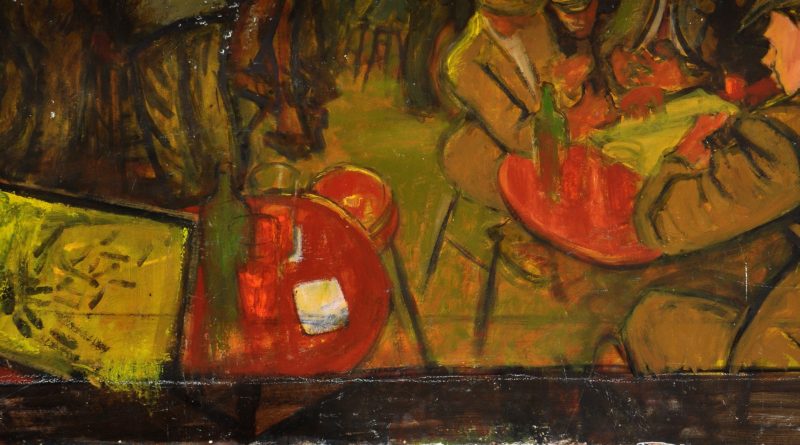 A ‘lost’ Norman Stansfield Cornish painting that was used as one of the panels on the artist’s bath cabinet is to be auctioned in Newcastle after being discovered by the new owners of his former home.

Tantalisingly, the unique painting of Men Drinking in a Pub appears to have another artwork on the other side which is partially obscured by emulsion. The picture is expected to attract huge attention when it goes under the hammer during the three-day Anderson and Garland Fine Art Sale on September 15-17.

The piece by the famous Pitman painter, who died last year, was found during the renovation of the artist’s old home in Whitworth Terrace, Spennymoor, by new owners Joe and Deborah Smith.

The Smiths uncovered the picture while taking out the old bathroom, which will form part of the 1950s Town being built at Beamish Museum to celebrate Cornish and the Spennymoor Settlement. The picture was probably only saved from certain or partial destruction due to Norman’s bequest.

Mrs Smith, whose father was Cornish’s cousin, said, “It’s not quite as big as a bath panel. It’s a pub scene, we think from the early 1960s. It’s not signed but we know it is definitely a Cornish because his son-in-law Michael has authenticated it and has written a letter of authentication.

“On the back is another picture. It’s an amazing story. It’s got potential – with the right frame and some TLC, it’ll look great.”

Mrs Smith, whose husband knew Cornish through the local bowls club, wasn’t aware that their new home had belonged to the artist when they viewed the house for the very first time.

She said: “We love it to bits. It’s a big rambling house with five bedrooms and it’s very, very calm. Our bedroom is in what was Norman’s studio.”

The newly-discovered Cornish with a second picture on the back comes after an early self-portrait of the artist with a hidden portrait of his wife on the other side was sold by Anderson and Garland for an astonishing £13,500 in January. There is currently huge interest in depictions of North East working life by the miner-turned-artist, who died in August last year aged 94.

Anderson and Garland art expert, John Anderson, said, “What is intriguing about this piece is that there is clearly a painting on the other side, like the self-portrait we sold with a picture of his wife on the other side.

“On the other side of this one, you can see the edges but not the centre. He’s white emulsioned over the top of it when the bath panel was installed. It’s a piece of salvage that may yield a masterpiece.

“Most artists, if suddenly touched by the muse will grab whatever is available to work out the inspiration. This seems to have happened here, where he has worked out a sketch, possibly two.

“It’s not unusual for artists to look upon their work in a different way to the way their enthusiasts do.

“In this case, presumably, he looked at it and thought ‘there’s a painting I’m not satisfied with’ and rather than going to the shop when he was panelling the bathroom cupboard, this was a cheap and convenient expedient. Maybe Mrs Cornish was even on his case.”

Mr and Mrs Smith plan to use some of the sale to commission and renovate an interior stained glass door in memory of Norman Cornish.