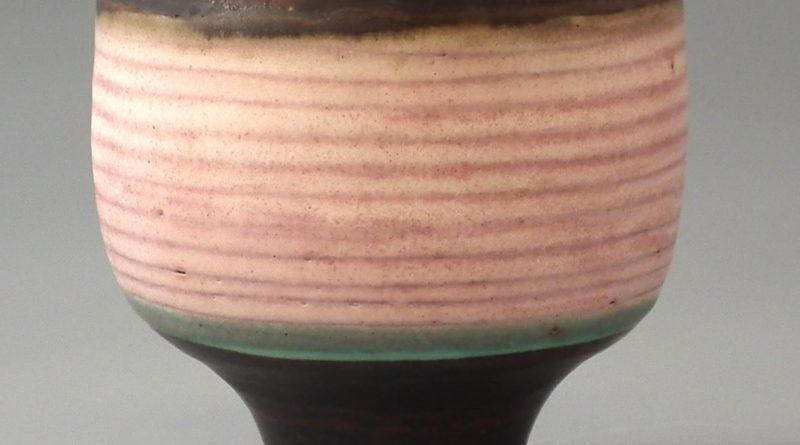 A fascinating paradox lies at the heart of Lucie Rie ceramics. On the one hand her work is grounded in modernism and an interest in design and architecture dating back to her early years of study in Vienna; yet on the other her most personal work has a depth of character and texture, as well as a powerful simplicity of form and deliberately evocative, primitive quality, that is reminiscent of the ceramic treasures unearthed in an archaeological dig.

In the late 1940s, Rie apparently visited the museum at Avebury in Wiltshire and was much taken by the displays of Neolithic and Bronze Age pottery, as well as the basic tools – made with bird bones – that were used to make patterns on the clay.

Certainly her work was very different in character from the model championed by the likes of Bernard Leach, who, along with many followers, was far more influenced by Japanese and Asian ceramic traditions. Rie – rather like Gertrud and Otto Natzler and her dear friend and colleague Hans Coper (all émigrés from Austria and Germany) – was more concerned with finding an individual voice, outside the mainstream. 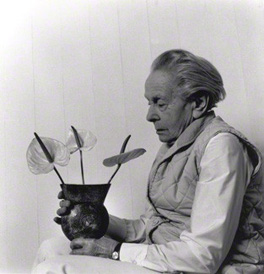 Born Lucie Gomperz in Vienna in 1902, Rie was the youngest child of a prosperous Jewish doctor, who designed his waiting room and surgery in a modernist style. She studied at the Vienna School of Arts and Crafts under Michael Powolny and was also influenced by the modernist architect and designer, Josef Hoffmann. Her early work was characterized by a sense of austerity and purity of form.

She married Hans Rie in 1926 (the marriage was dissolved in 1940) and began exhibiting her work in the late 1930s. Her apartment in Vienna was designed by the architect Ernst Plischke in the modernist style. But in 1938, just after the Anschluss and in the face of growing anti-Semitism, Rie moved to England, taking her work and as many pieces from her apartment as she could.

She settled in London and established a studio in Albion Mews near Paddington. During the war years she worked in an optical factory. To make ends meet she then began designing and making ceramic buttons for Bimini, as well as jewelry. In 1946 Coper joined her at the pottery, later helping her develop a range of functional table and kitchen ware.

At the same time Rie was evolving her personal work and developing individual pieces in stoneware and porcelain. She and Coper provided one another with mutual encouragement and support. Certain characteristics and common interests connected their work – which was often exhibited together over the years – but Rie focused upon a more limited range of shapes and forms, particular bowls, urns and vases, within a modest output that was highly accomplished and increasingly sought after.

Coper restricted his finishes to a concentrated palette of slips and firing techniques, but Rie was intrigued by her ongoing experiments with glazes and the chemistry of ceramic textures. In this respect she had more in common with Otto Natzler, and a number of her footed bowls, bottles and vases reveal a similar interest in highly textured surfaces that are pitted and pocked, with melting colours and rugged hues.

Rie’s pots have a weathered quality – as though worn down and scarred by exposure to the elements over hundreds of years. This was especially true of her work of the 1960s and beyond – using layers of slips mixed with metal oxides – while the 1950s pieces tended to have a more familiar decorative element, with sgraffito markings and simple but evocative abstract patterns. Rie’s work always sat well with the interiors and architecture of the time, offering a striking focal point.  Hard working, ordered, precise and direct, Rie began to receive considerable acclaim by the late 1960s. She taught part-time at the Camberwell School of Art but always remained highly focused on her work, calling herself, simply, a potter. ‘Through her training as a potter in Vienna to her exile in London, and to her creation of a style of making that had no counterpoint in the earthy functionalism of British pottery,’ wrote ceramicist and author Edmund de Waal in his assessment of Rie, ‘she projected a force-field of separation from the expectations of those around her.’

What the dealers say about Lucie Rie ceramics

Popular with British, European, Japanese and American collectors, prices for Lucie Rie’s work have been steadily rising since her death in 1995, with the majority of her work now commanding very good prices. Her broad appeal lies in the contradictory nature of her work, with frail, fragile-looking shapes sculpted from sturdy stoneware. This particularly dynamic quality is known as the ‘Lucie Rie quiver’, and it’s one of the aspects that has helped keep prices buoyant.

Earlier this year, Peter Wilson, a leading auctioneer of fine art and antiques in Cheshire, which specialises in Lucie Rie, sold this vase for £8,500. The price was driven by massive interest from Japanese collectors, one of whom secured it on the internet. Peter Wilson ceramics specialist Chris Large said “Demand for Lucie Rie has been consistently high and remains so, reflecting the appeal of her unique and much appreciated work”.

He continued: “As with any type of pottery, condition is an important factor in determining value of a piece and the most sought after pieces are those with no damage or chips. Part of the beauty of Lucie Rie’s work lies in its complex texture and varied decoration, and the pieces displaying her trademark brilliant glazes in rainbow colours such as peacock blue, magenta and gold remain particularly popular.”

The vase, which had an estimate of £1,500, was bought from the famed studio potter over tea and cake in her London mews cottage in 1983. In a letter sold with the lot, the vendor recalled the purchase.  She wrote: “Lucie Rie’s telephone [at her studio in Albion Mews] was in the London directory. I dialled and yes, I could visit to choose a pot. When I visited it was to a tiny mews cottage with the sitting room upstairs and studio with big windows downstairs. Lucie Rie’s pots sat about like found seashells. Natural.”

She described Lucie Rie as a “tiny, sparkling person” who invited her upstairs for tea and cake. “We sat at a table at one end of a long thin room. There were Bernard Leach pots, huge ones, by the stove. A window was, it appeared, propped open by a stainless teapot. It transpired David Attenborough had advised her that the teapot’s reflective surface would scare away a grey squirrel which she had discovered dancing among her Hans Coper pieces. The squirrel would think another squirrel was already in residence.”

The vendor described her new purchase as “a small hand held pot with a deep foot”, which cost £80. “It could hold sugar, sweets, nuts. But really it best holds the colour of itself. Pinks and the colour of the flash of a kingfisher and gold.”