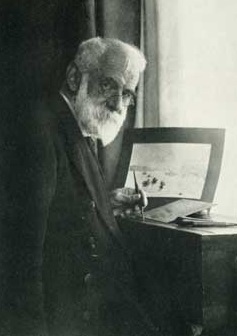 Richard Kay, Director of Pictures at Lawrences in Crewkerne explains how to spot work by celebrated maritime artist William Lionel Wyllie for less than £1000.

It is rare to find an artist, inextricably associated with just one sort of subject, whom everyone admires. William Lionel Wyllie is held in just such high regard: even art collectors who have no interest in marine pictures recognise Wyllie’s work in the saleroom with a sort of quiet affection, rather like spotting one’s elderly former schoolteacher in the supermarket.

Wyllie’s popularity is easy to understand on a couple of levels – he was undeniably skilful in all that he did and his work has a straightforwardness about it that makes its subject matter quite plain – but the more puzzling aspects of his appeal are its longevity and the broad base of collectors whom his work continues to attract. Of course, some buyers are retired or practising sailors but others are confirmed landlubbers who would neither know nor care about the differences between a brig, a barge, or a bakinka. Those in this latter group would be pleased to add a Wyllie to their collection but would not rush so eagerly to acquire a work by marine painters of the calibre of, say, Frank Henry Mason or Charles Dixon.

It is possible to buy a Wyllie for less than £1,500. Sadly, no oils by him fall into that price range and the affordable watercolours are becoming scarcer too, but I have selected eleven images – five etchings and six watercolours – that would grace any collection without breaking the bank. 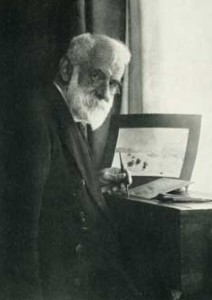 Wyllie was born in Camden, London, on July 5th 1851. He was the elder son of the relatively little-known artist William M. Wyllie, a man of fairly prosperous origins, and Katherine (nee Benham) who had already had two children by Percy Smythe. Young Wyllie’s artistic abilities were obvious to all and he showed his first work at The Royal Academy in 1868, aged just seventeen. He completed his art education at Heatherly’s school and the RA in 1869. Shortly thereafter bought a boat, `Ladybird`, to use as a floating studio so his intentions were clear from this early age: he wanted to be a marine painter but nearly gave it all up for a career at sea after subsequent works were rejected by the RA.  Nonetheless, he was kept busy by The Graphic, a rival to the all-conquering Illustrated London News. The precise draughtsmanship required for illustrative work focused Wyllie’s attentions on drawing and etching.

Aged 28, he married Marion `Mim` Carew, nine years his junior, and she bore him nine children. Tragically, two died in infancy, one died in adulthood and two were killed in the Great War. Only son Harold became an artist of any distinction (he was a dutiful but uninspired imitator of his father and even copied his father’s handwriting). 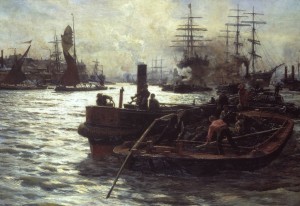 In 1883, Wyllie’s masterpiece entitled Toil, Glitter, Grime and Wealth on a Flowing Tide (Tate Britain) was bought for £700 by the Chantrey bequest (£80,000 in today’s money) and it was eagerly praised for its industrial and gritty realism. Emboldened by this good fortune, Wyllie moved his young family from Chatham to Hoo Lodge above the Medway in 1885. The house had the convenient benefit of offering a fine vantage point from which to paint the bustle of the river below. Within four years of this move, he became a fully established figure in artistic circles when he was elected Associate of the RA. His full approval as a printmaker par excellence did not come until 1903 when he was elected to the Royal Society of Painter-Etchers and Engravers.

In addition to his art, Wyllie wrote thoughtful technical guides on painting. He then moved to The Tower House in Portsmouth in 1906, a home so close to the Solent that the ground floor was regularly flooded. He was elected a full Royal Academician in 1907 but also researched esoteric matters of astronomy that appealed to him. During the war, he travelled with the navy and painted at the Western Front.

By the late 1920s, Wyllie’s work was in such indomitable demand that he survived the Depression without needing to slacken his pace but his etchings became harder to sell afterwards (the etching boom expired just before Wyllie did). In 1931, aged 79, he was working on a vastly ambitious 42ft panorama of The Battle of Trafalgar, helped in part by his daughter Aileen, but he died in London on April 6th of that year. He was buried at Portchester Castle near Portsmouth and three of his last works were shown at the RA that summer, the paint on them barely dry. 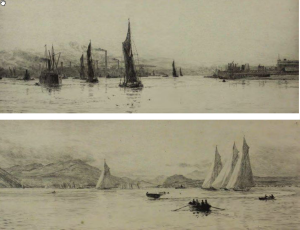 While the above may seem like an unfairly brief resume of a full life and a career that spanned eight decades, three essential details emerge: Wyllie’s RA training and his work for The Graphic made him a superb draughtsman; his popularity flourished during an era when etchings were massively popular as well as being an easy way to broadcast one’s talents (an etched image could be sold 100 times); and his early commercial successes were the equivalent of an actor winning an Academy Award with his first film.

From his twenties onwards, Wyllie always had just enough money to work for pleasure or to accept only the commissions that suited him. This last point was almost an unfair advantage: Wyllie never needed to find a style or a subject that he could sell, nor did he ever want for buyers. As early as 1887, Wyllie’s Work-a-day England, painted only the year before, made more than £220 at auction. Such a sum would be the equivalent of about £25,000 today and there are few (if any) marine painters in their thirties in 2014 who could ever consider such a market for their work in the saleroom.

For every collector who thinks an etching dull, monochromatic or (incorrectly) judges it to be unworthy of his attention because it is not a unique work of art, there are many who regard such a print as a perfect way to appreciate an artist at an affordable point of entry to the market. Wyllie’s etchings were not a cynically mass-produced substitute for his other originals, but autonomous works of art in their own right and it is possible to find some signed examples for barely £100 at auction. Upon such a simple base did Wyllie’s popularity establish itself and, as many artists discover to this day, a collector who begins with the purchase of an etching will shortly be tempted by a watercolour.

Unusually for an aspiring Royal Academician, Wyllie was not always at his best when working in oil. His biographer and grandson, John Wyllie, is clear on this: “It is for his watercolours, etchings and drypoints, rather than his oil paintings, that we may expect Wyllie eventually to be remembered.” Indeed, his early works in that medium were judged to be “leathery in tone and texture and heavy in colour”. The demands of the market soon sharpened his skills and Wyllie’s mature oils are superbly atmospheric.

However, the spontaneity of work on paper appealed to him more and, even though the production of an etching was a painstaking procedure, Wyllie liked its ready transfer of an idea to an image. So enamoured of it was he that he etched more than 300 plates in his career and, as his proficiency increased, he sought ever greater technical complexity: it seems to be the medium at which he felt most at ease. If each copper plate yielded 75-100 saleable impressions, one may say that Wyllie produced an awesome total of 25,000-30,000 etchings in his lifetime. Still larger editions were possible from steel plates supervised by publishers such as The Art Union of London or Robert Dunthorne. Perhaps surprisingly, no catalogue raisonne has ever been produced of Wyllie’s etched works. He never dated his prints so a chronology is vexatious but it may be noted that the subtleties of his technique improved measurably as he matured.

Wyllie’s watercolours reveal a similar love of spontaneity. His half-brother, Lionel Percy Smythe (1839-1918), was a skilled figure painter but he worked with a laboriously feathered technique. Wyllie himself preferred to use the medium almost as a photographer would: the detail is accurate but captured quickly and with remarkable deftness of touch. It takes an artist of exceptional ability to make something as fleeting and evanescent as fog on the Thames look simple to capture on paper: Wyllie’ skill was not just to do it but to see that it needed to be done. A less audacious or less able artist might have chosen to ignore the complexity of the challenge altogether.

If Wyllie loved complexity of technique, then he loved the challenging viewpoint too. From his floating studio, he was able to devise subjects whilst bobbing on the water but he favoured the high viewpoint from dry land just as much for it permitted him to capture a yet more evocative panorama. In addition, he could exercise his compositional knowledge. His subjects are neither timidly conceived nor tentatively executed. John Wyllie suggests that this was “founded upon rules and method, rather than on vision” but I would suggest that Wyllie’s ‘vision’, his awareness of a detail that other artists might have overlooked, contributed considerably to his perception. In addition, ‘vision’ has associations with something semi-spiritual. It connotes a sensitivity to something intangible, which can be experienced even if it may not be readily observed. Wyllie had a superb eye for the subject that catches the imagination: how many young boys dreamt of a life in the Navy or as a merchant marine by gazing at a Wyllie on the wall?

Wyllie’s good fortune was to be an artist during the most fertile era in Britain’s industrial history. As the British Empire expanded, Wyllie witnessed the majestic displays of the navy at Chatham, Greenwich, Portsmouth, Plymouth and elsewhere; the burgeoning growth of exports and trade from London, Glasgow and Newcastle; the frenetic bustle of the Thames, the Clyde and the Tyne; and, sadly, the dwindling fortunes but tenacious labour of the humble fisherman. All these waterborne efforts inspired his work and, of course, there were sailors, merchants and captains of industry who were in turn inspired by these scenes of life that they knew and understood so well. Admittedly Wyllie had to jostle for these men’s attentions alongside such able artists as Frank Watson Wood, Frank Henry Mason, Charles J. De Lacy, William M. Birchall, Charles Dixon, Herbert M. Marshall and a score of others, but his work had the bravura of accomplishment to outpace most of these rivals at every turn. Undoubtedly, Wyllie’s awesome productivity ensured that his work was not too troublesome to find.

The last element of Wyllie’s appeal is his image as a ‘common man’. That is neither to belittle his comfortable background nor to judge unkindly any aspect of his gentlemanly manners or his avuncular, white-bearded appearance. Not for Wyllie the dandyism of Whistler, the avaricious swagger of Munnings, the bohemian hedonism of Augustus John or the furtive inscrutability of Sickert. Intriguing as all these artists were for such quixotic and picaresque caprices to their personalities, Wyllie was a practical, practising, pragmatic artist’s artist.

He worked tirelessly, always with great skill but also with dependable reliability; he was not a disciple of any artistic movement, nor did he seek to be; he had pupils and disciples but no enemies; and he never sought to be anything more than a talented and observant artist. From the heights of Hoo Lodge or the perilously weatherbeaten walls of The Tower House, Wyllie worked conscientiously for many decades. Had you knocked on his salt-spattered front door in Portsmouth, I feel certain that he would have welcomed you in to ‘come up and see his etchings’. Charmed by the man himself as much as by his art, you would have been wise to buy one.