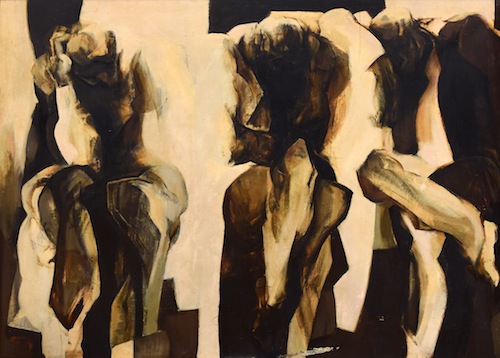 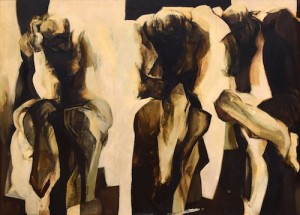 A painting, which hung at one of the 1960s best-known nightclubs, goes on sale this month.

The Soho club was one of the most fashionable hangouts of the sixties and where Christine Keeler posed for her iconic photograph on an Arne Jacobsen style chair.

The painting, which is slightly damaged due to a riotous night at the club said to have included the comedian Lenny Bruce, is estimated at £2-3000.

Bruce, Dudley Moore and Gerald Scarfe were all regulars at the Greek Street venue.

The painting is one of 30 lots from Nicholas Luard’s widow Elisabeth – the food writer, journalist and broadcaster.

Other paintings in the sale include those by John Minton, acquired from Jeffrey Bernard, their London lodger, as well as Leon Underwood, which came to Elisabeth through her husband’s godmother the artist Monica Rawlins.

Also included in the collection will be various ceramic lots and lamp bases by Quentin Bell, which were purchased from the artist’s studio in the 1980s. Elizabeth Laurd, 73, is downsizing from the Grade II listed home in Wales she shared with her husband to move back to London.

The Elisabeth Luard Collection of portraits, oils, watercolours, drawings and ceramics of approximately 30 lots, will be sold as part of Cheffins’ art and design from 1860 auction on October 22.