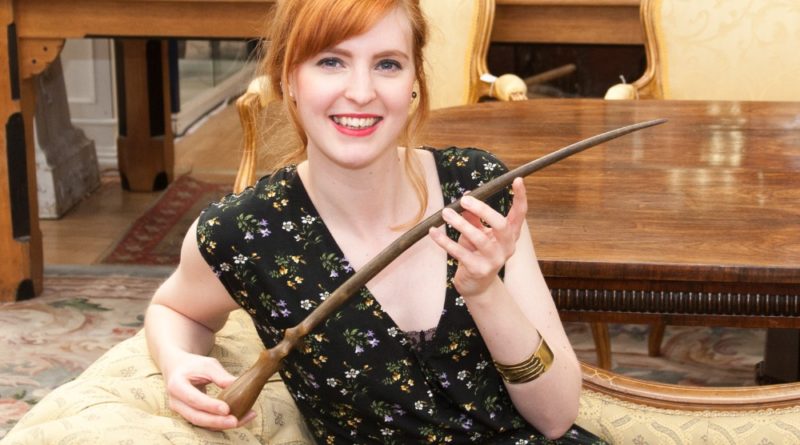 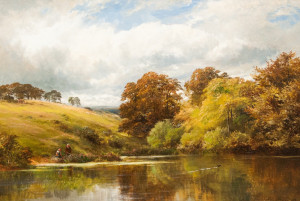 Amongst the highlights from the Hansons’ recent Fine Art Auction were a wide range of objects and art made in Derbyshire. The star lot of the three day auction, which included ceramics, paintings and works of art from across the region, was an oil painting by celebrated 19th century artist George Turner (1843–1910). The picture of Knowle Hill, Derbyshire, eventually sold for £11,300 after much competition and interest from across the world. Local enthusiasts and collectors expressed an interest in the painting which depicts a scene still recognisable to many, more than 100 years on.

Other artists featured in the auction included Royal Crown Derby painters W E J Dean and Michael Crawley, as well as the well-known Gresley family of watercolourists (including Frank, Cuthbert and Harold) and the contemporary Derbyshire born artist Andrew Macara.

A watercolour by Harold Gresley (1892-1967), a third generation painter from the Derbyshire family, made £1,250. The view was another local scene, of Kings Newton, in the south of the county.

Andrew Macara (b.1944) had three works in the auction. Famous for his impressionistic oils and popular with contemporary collectors, an unusual early townscape of Derby attracted much interest, eventually selling for £1,100.

Perhaps Derby’s most famous export is the porcelain produced by Royal Crown Derby. Whilst early porcelain from the 18th century attracted competitive bidding, including a pair of putti figures which made £170, 19th century and 20th century works proved to be the star lots in this section. A covered vase decorated by Desire Leroy, exquisitely decorated in raised gilt and enamelled jewels, made £450, despite its obvious loss of handles and finial. The work of Stefan Nowacki, another contemporary and very well regarded Derby porcelain artist generated much interest when a coffee can and cabinet plate went under the hammer. The two pieces eventually sold for £480.

A collection of pieces by William Edward James Dean, did similarly well in the same section of the auction. Various lots, from small pin dishes to an unusual lampshade in porcelain all caught the attention of bidders. The artist, famous for his marine paintings exceeded expectations and presale estimates when two small plaques sold for £550 and the lamp shade, depicting a view of boats on the Thames with St Pauls Cathedral in the background, sold for £600. Other lots painted by Dean did almost as well with a group of small trinket dishes selling for £340.

Another famous Derby export was clocks. Two such clocks by one of the best known makers, Whitehurst, featured in auction. Both wall mounted examples, the spike clock with alarm function sold for £1,100, whilst the other went for £950. 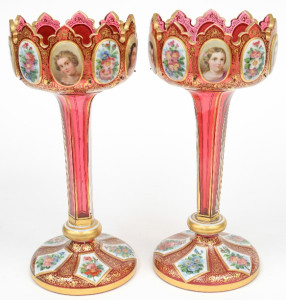 Besides works by Derbyshire producers and artists, other antiques and works of art sold particularly well. In the glass section, the allure of extravagant, heavily gilded and colourful Bohemain glassware, proved too much for some. A pair of ruby lustres, with opaque floral plaques sold for £1,300 and other similar examples in the auction sold in the high 100s, above initial estimates.

In the same vein as the Bohemian glassware was an elaborately gilded and enamelled carriage clock by French manufacturer E Maurice. At only 21cm high and in a fitted case, the clock sold to a private collector for £7,200. Maurice’s clocks were widely exhibited in the 1880s and 90s, including at the Paris Exhibition of 1889. This particular example was of exhibition quality. 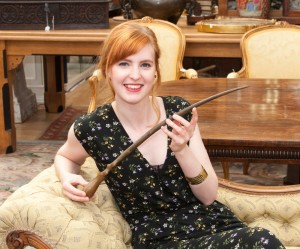 Elsewhere in the auction Oriental and exotic items sold well with a Chinese export silver tea set selling for £2,000 and a tribal rhino horn weapon making £1,700. A group of six Chinese bowls also sold for £1,700.