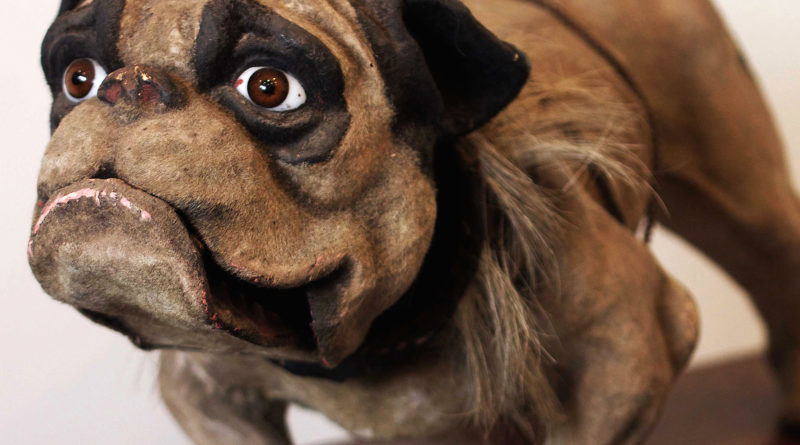 An 18th century kitchen chimney crane and a French 19th century ‘growler’ bulldog toy are among the unusual antiques going on sale at The Pavilions of Harrogate Antiques & Fine Art Fair at the Yorkshire Showground from 30th October to 1st November 2015. 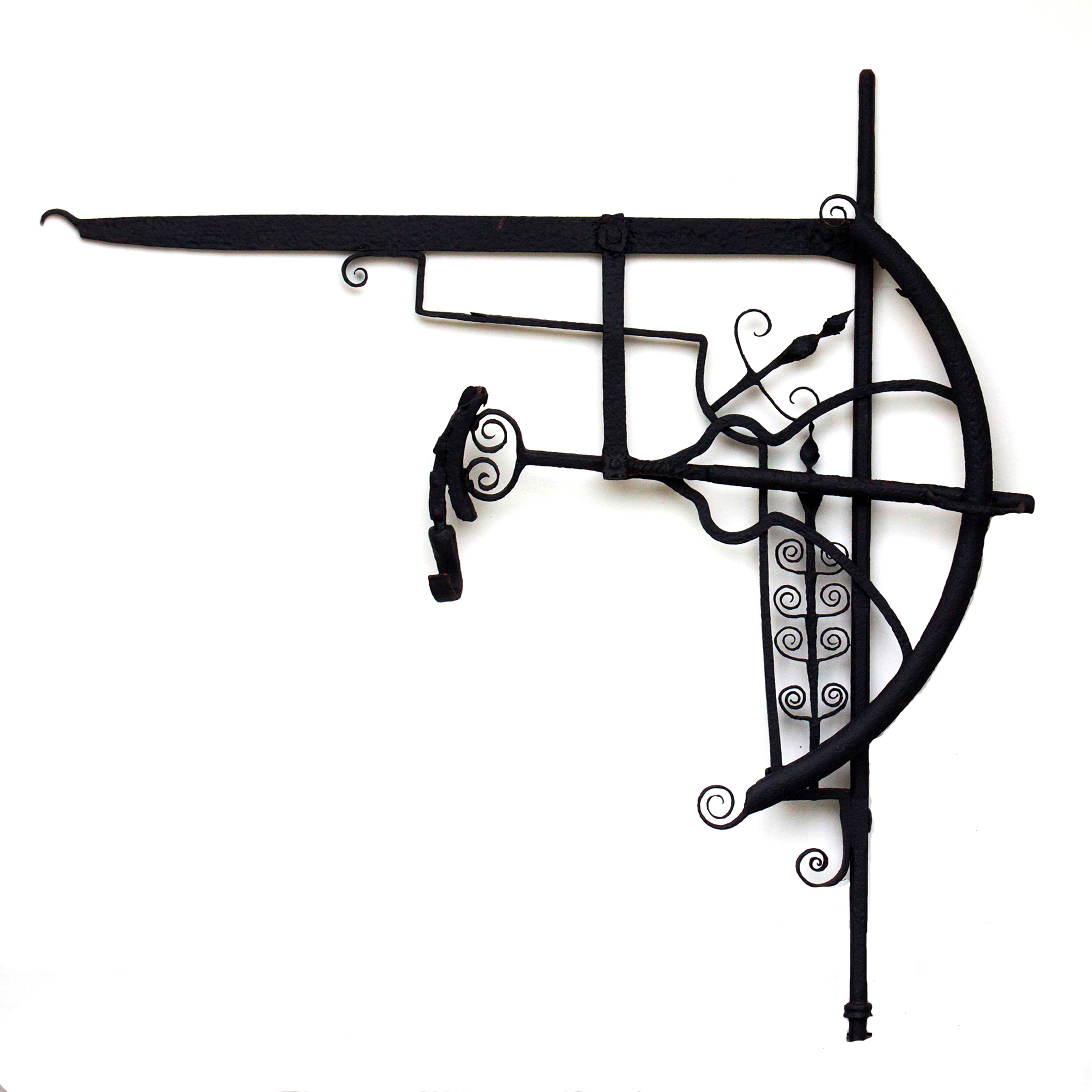 The 18th century iron chimney crane, the kind of device that might have graced an early kitchen at Downton Abbey, will be shown by mother and  daughter dealers Karen & Chloe Rymer from ‘Molly & Maud’s Place’,  York. Chloe says, “Chimney Cranes are a feature of the homes of the American Colonial Period and 18th and 19th century Western Europe.  Although the chimney crane may be thought by some to be a Yankee invention, it was common in both British and American houses of the era. The purpose of the crane is to allow a cooking pot to be swung away from the fire, preventing burn injuries to the cook as well as regulating temperature of the pot. The chimney crane is an important step in open hearth cooking as it helped save lives and allowed cooks to be more creative.”

For centuries before the iron crane was introduced, colonial and European fireplaces used a chain that hung from a pole directly over the fire. The chimney crane, by contrast, was bolted to the wall and was hinged in order to swing easily. Numerous pots, kettles and other items could be hung on the crane to simmer and cook over the flames. This extremely rare example, in fine condition, is priced at £875.

Another fascinating collectable from Molly & Maud’s Place will be a life-sized papier mâché French ‘growler’ bulldog toy dating from around 1880. Strikingly scary and realistic, with its glass eyes, leather collar, nodding head, moving mouth and growling sound, the toy is in good working condition, which, says Chloe, is rare for a toy of this age. 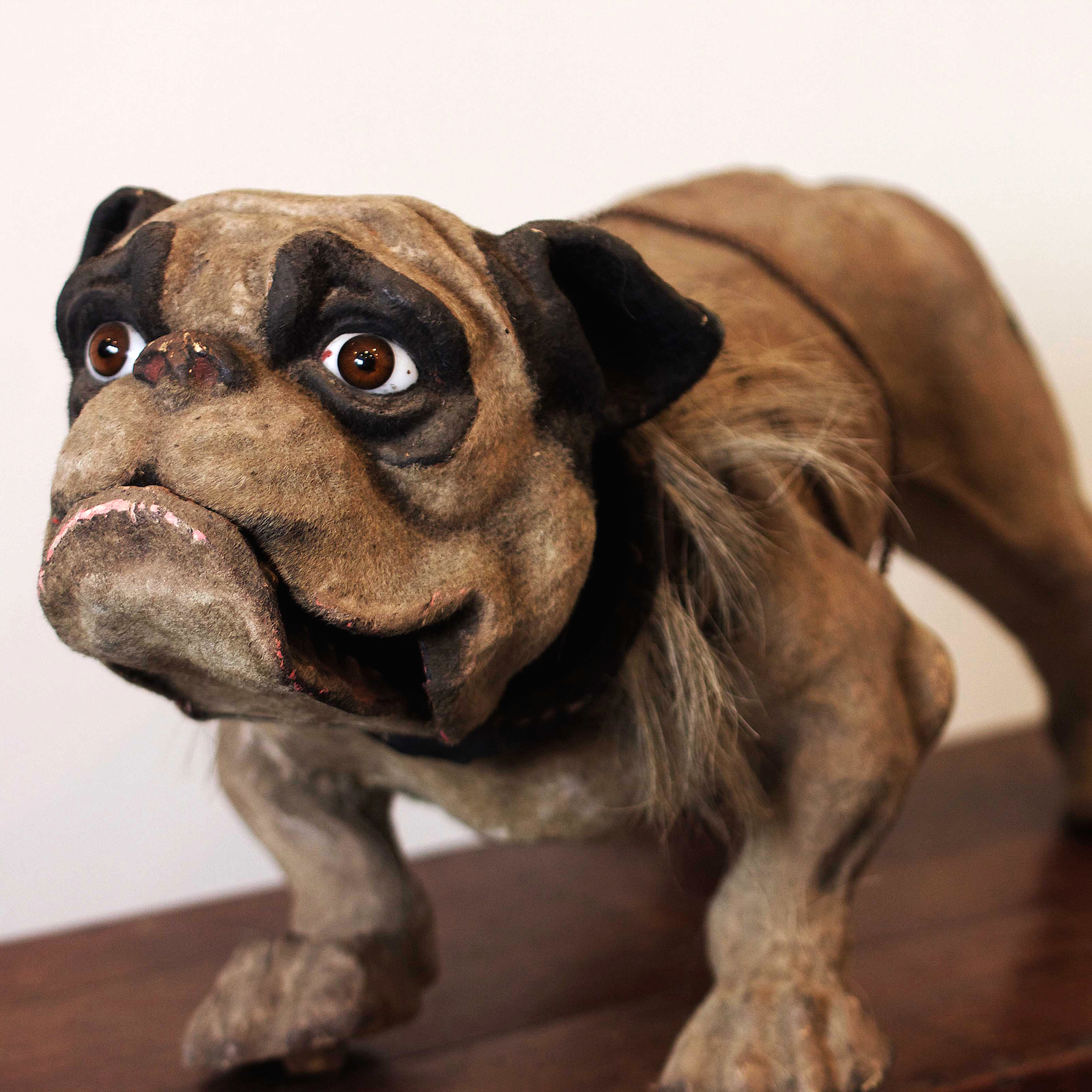 The dog has a nodding head and a pull cord mechanism which operates its mouth to make it open and ‘growl’. It is on wooden wheels, has glass eyes and a leather and coconut husk collar. The toy has been mainly owned by one family through its life time, who shipped it from where they resided on The Gold Coast, Africa (which is now Ghana) to England in the 1930’s. The dog measures 57cm long, 28cm high and 24cm wide and is £1650.

The Pavilions of Harrogate Antiques & Fine Art Fair is run by Sue Ede of Cooper Events, who took over and re-launched this regular event just three years ago. Sue says, “We now have fifty specialist dealers from across the country with a vast range of period pieces and prices to suit every pocket, from £25 to £50,000. The easy parking, good catering facilities and above all the wide choice of fine art, antiques, collectors items and all kinds of rare and unusual pieces make this event a must for collectors.”