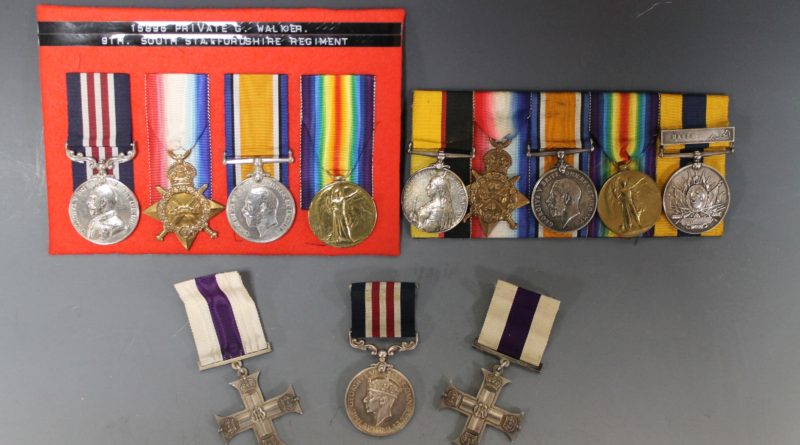 As the country prepares to remember its fallen in a year that marks both the Centenary of WWI and the 70th anniversary of the end of WWII, a West Midlands auction house will sell a collection of medals that includes four exceptionally rare gallantry awards. 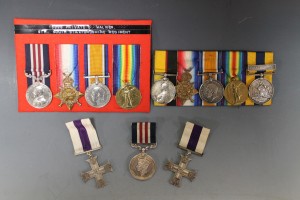 Set to come under the hammer in Cuttlestones’ Friday 6th November Specialist Collectors’ Sale at Wolverhampton Auction Rooms, the twelve medals all hail from a single, private collection and will be split into five lots forming part of an impressive medals and militaria section.

The gallantry awards featured include a WWI Military Cross, un-named as issued and pinned for wear, carrying an estimate of £300-400. Also estimated to achieve £300-400 is a WWI era Military Cross, engraved on the reverse with ‘Beaumont Hamel 10th June 1917, Captain H. Clark’; whilst a George VI Military Medal impressed with ‘5953857 Pte. W. H. Harper. Green Howards’ is estimated at £800-1200.

In a year where interest in the WWI and WWII conflicts is at its peak, these lots are expected to cause a real stir among serious medal collectors and those with an interest in military history. Cuttlestones’ Medals and Coins specialist, Adrian Simmons, explains, “Gallantry medals are pretty rare things on the market – they were often awarded, often posthumously, for act of great bravery in the face of adversity, so many families choose to keep them as heirlooms and reminders of the heroism of family members, and those that do come onto the market are snapped up quickly by collectors.”

He continued, “The presence of one or two such medals in a sale will pique the interest of the collecting community, but to have four in a single sale is pretty unusual to say the least, so we’re expecting interest in these lots from all over the world. However, with the Staffordshire provenance it’s not just international collectors who’ll be keen to snap these up, but those with an interest in local history are also likely to be keen. Of all of these lots, the rarest is undoubtedly the George VI Military Medal – depending on who’s in the room, on the internet and on the telephone on the day this one could exceed all expectations!”