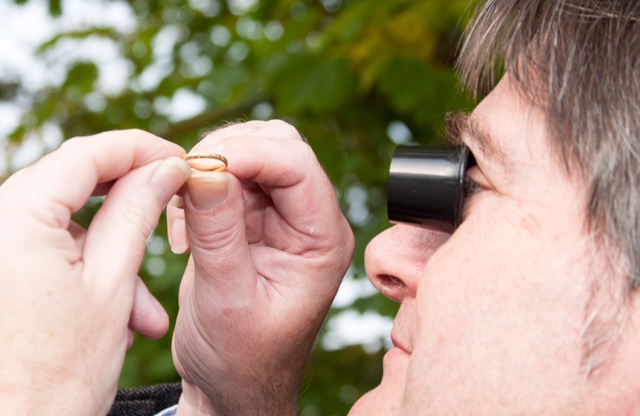 An unassuming ring found in a local charity shop has turned out to be a rare gold poesy ring dating from the reign on Queen Elizabeth I (c.1580). 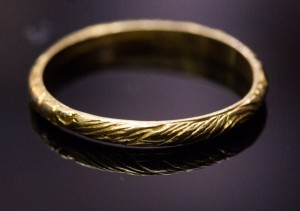 Posey rings, popular in England and France during the 15th to 17th centuries, were most commonly given as lovers’ gifts, tokens of regard, a gift between friends or as a pledge or loyalty. The word “poesy” translates as “short rhyme” and these rings would have inscriptions, usually in Latin, English, Norman French or French, hidden as a secret message on the inner ring, known only to the wearer and the giver. The message would be a rhyming motto, or have a poetic lilt and was often taken from literature and verses of the time.

These rings have echoes of courtly love and hark back to a time of chivalry where love was bound by honour and codes. 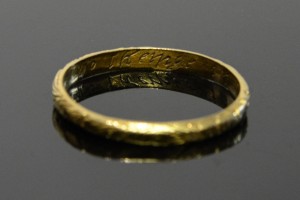 The poesy ring came in many forms. The outside could be both simple and unadorned, or it would be engraved with a pattern or motif linking it to, or forming part of the hidden message. Enamelling engraving and chasing were all popular, although few remain with the enamelling complete.

Auctioneer and jewellery valuer Izzie Balmer commented, “We are delighted and honoured to have our very own poesy ring. Although fairly ordinary looking at first glance, it has been a joy to research an object with such sentiment and history.”

The outside is decorated with a gorgeous swirling motif, reminiscent of lush foliage and a summer’s memory. Its simple clean lines mirror the unassuming hidden inscription: 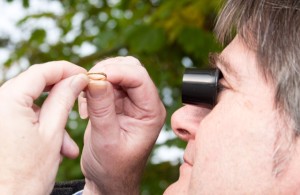 Whilst a different spelling, this same message is known to have existed on a ring dated 1674, the reign of Charles II, ‘The Mer
ry Monach’, famed for his mistresses and love of women.

Discovered by the vendor in a charity shop, this remarkable find has been XRF tested as a high carat gold and the late 16th century poesy ring is to be offered in the Hansons‘ Winter Fine Art Jewellery Showcase Auction on 1st December with a guide of £800 to £1,200.