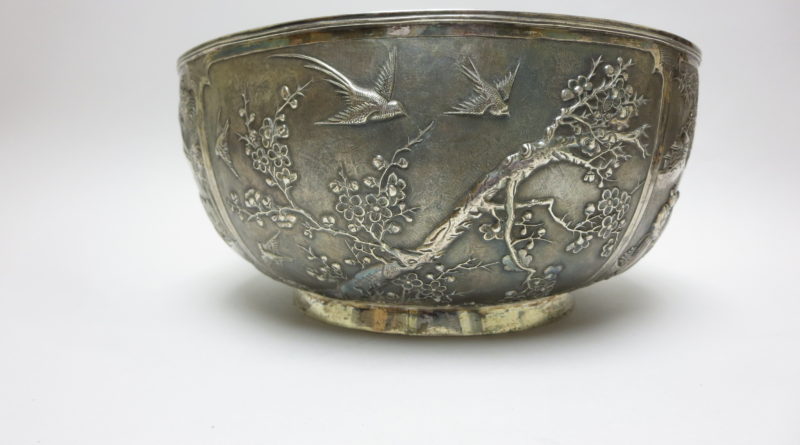 An upturn in jewellery and silver trade was seen at Brightwells Autumn auction, which offered a total of 800 lots during two days.

Highest price of the sale went to a Three Stone Diamond Ring, which flew past its estimate after being hotly contested for. A private bidder in the room was victorious, when the hammer fell at a pleasing £10,100. It was also a good day for watches, with several exceeding estimate, in particular a Rolex Oyster Perpetual ‘Air King Date’, which was secured by a private collector for £1,500. There was also renewed interest for brooches and diamond stud earrings, with an Art Deco Diamond and Sapphire brooch selling for £2,800, along with a Diamond and Sapphire pair of earrings for £3,200. 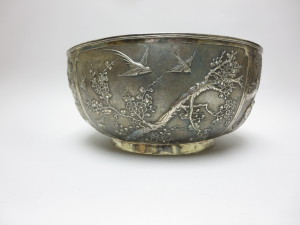 Brightwells said that silver trade also showed signs of improvement, with quality decorative items selling well. A Chinese silver large bowl was as expected the star lot. After strong opposition on the phone, the hammer fell at £4,300 to a trade buyer in the room. Other good prices achieved included £1,200 for a George III Quart Tankard, £980 for a Victorian silver gothic mustard pot and £480 for a rather charming George III oval Nutmeg Grater.

The ceramic section contained a number of Beswick figures, all from local private collections. Lot 406 a Galloway Bull, of which only a very few were made, achieved the highest price at £1,150. There was plenty of international interest in lot 436, an 18th Century slipware dish, with an American telephone bidder losing the fight to a bidder in the room, when the hammer fell at £1,900. 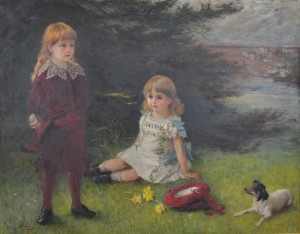 Portraits were the main stay of the picture section, with a number of 19th Century portraits selling beyond expectation. A consignment from a country house near Ludlow attracted strong local interest. The highlight of the group, which sold for £4,300, was a portrait of two children by Otto Theodore Leyde R.S.A. This particular subject depicted two children playing ‘In the Gardens at The Hall, Wirksworth’ Derbyshire. From the same consignment, two portraits painted in Rome in 1876 by Roberto Bompiani depicting Mr & Mrs John Baddeley Wood, sold again to a private collector for £2,600. The study of a chestnut Hunter in a landscape by William Henry Davies represented a traditional English picture with wide appeal, the painting was secured for £1,600 by a private buyer.

The sale also contained an interesting single owner collection of Ethnic items, all of the items in the section found new homes and more than half of the collection was purchased by a single buyer, thought to be another private collector. 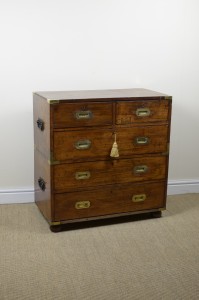 The furniture section created some interesting results. Lot 850, a Howard & Son of London Easy Chair created an enormous amount of pre-sale interest, with multiple commission bids and 6 telephone bidders, the chair sold for 10 times its estimate at £5,200. Two chemist’s counters, which are often of interest to interior designers, also sold well above estimate at £1,500 and £1,900 respectively.

There were several dresser bases in the sale, an area that in recent times has been difficult to achieve good results, however, all sold very well. The top selling was lot 887, a Georgian oak example with three draws on cabriole legs, which sold for £1,700.
Another piece that created a lot of international interest was a 19th Century brass bound Military Chest. This style of chest often attracts more attention, but even after receiving commission bids from as far away as South Africa, the hammer fell to a local private buyer for £1,500.