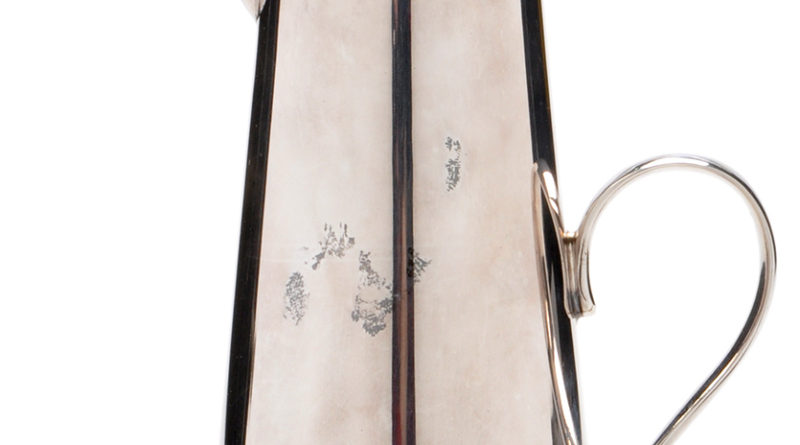 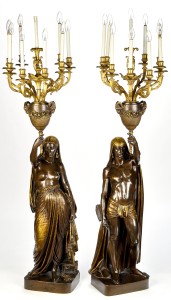 An enormous bronze candelabra and quirky collectible items beloved by English eccentrics are among the treasures going under the hammer at the final Anderson & Garland Fine Arts Sale of 2015.

A French candelabra, standing at 2.5 metres tall, is expected to make between £40,000 and £60,000 when it is sold in Newcastle during the three-day auction (December 1-3). Designed by Francois Christophe Armand Toussaint (1806-1862) and cast by Paris foundry Ferdinand Barbedienne (1810-1892), the piece features a near-naked Indian couple.

Anderson & Garland auctioneer Fred Wyrley-Birch said, “They are figural torcheres, which is very imposing, very decorative and very expensive. They come up for sale every now and then. This is a very nice example which is being sold on behalf of a titled Lady.”

More affordable eccentricities on offer include two 1930’s talking points made by Asprey. Lot 515 is a ‘Thirst Extinguisher’ – a cocktail shaker shaped like a fire extinguisher – and lot 514 is a toast holder with a burner to ensure the toast stays warm. Both pieces are being sold for the same vendor.

Asprey was founded in 1781 and sold ‘articles of exclusive design and high quality, whether for personal adornment or personal accompaniment and to endow with richness and beauty the table and homes of people of refinement and discernment’ from its emporium in New Bond Street. Today, the company is one of the world’s top luxury brands.

Mr Wyrley-Birch said, “Back in days gone by, people had completely pointless items that are wonderful, solving problems that simply didn’t need to be solved.

“They were bought by gentlemen of eccentric temperament; it was very much the sort of thing people did with their disposable income in those days, collecting things for everyone’s amusement.

“Novelty items like this always do well and Asprey is probably the most sought-after maker of novelty items and gentlemen’s ephemera from the 1860s to the 1930s.”

The toast rack has an estimated value of £70 to £100, and the ‘thirst extinguisher’ is expected to sell for a couple of hundred pounds, but could go for much more.

The quarterly Fine Art and Antiques sale brings together a huge range of collectible items from across Northern England and the Scottish Borders. The December auction will also include artwork by Pitman Painter Norman Cornish, whose paintings are currently in huge demand from collectors following his death last year.

Read our guide to collecting works by Norman Cornish and other North East painters here.