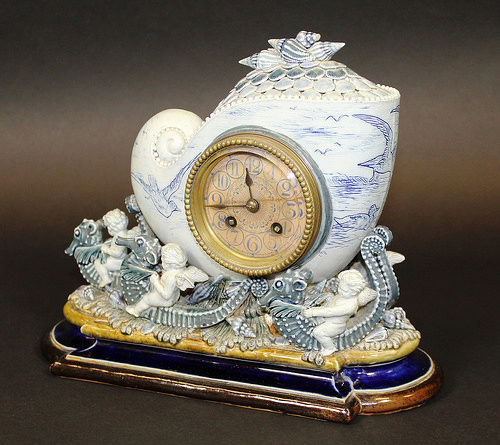 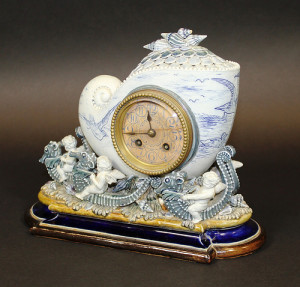 The George Tinworth clock was sold for £3,400 at Moore Allen & Innocent’s auction of selected antiques on Friday (November 6) – the highest price achieved for a clock by the renowned English ceramicist.

Tinworth worked for Doulton from 1867 until his death in 1913, at the age of 70. Born into poverty, he pawned his overcoat to pay for evening classes at Lambeth School of Art.

At Doulton, he produced vases, jugs, humorous figures and animals, and larger pieces. About thirty examples of his work were shown at the 1867 Paris Exhibition.

The 1878 clock, described by auctioneer Philip Allwood as ‘fine and rare’ was decorated by the equally-renowned Hannah Barlow. The case depicted a nautilus shell capped by scallop shells holding the clock movement with Arabic numerals, surrounded by cherubs riding seahorses. The clock is a one-off – the only other one similar to it resides at Museum Of Applied Arts And Sciences in Sydney, Australia. 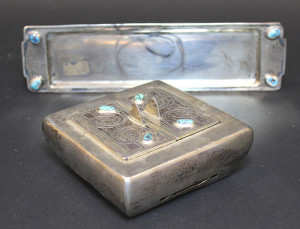 Despite the record-breaking hammer price, it didn’t achieve the highest lot price of the day: that honour was reserved for a circa 1902 Liberty & Co Cymric silver and turquoise inlaid inkwell by the famous Scottish art nouveau designer Archibald Knox.

It was a good day for ivory, with three ivory lots making the top 20 lot prices. 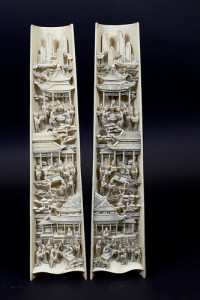 A 19th century Japanese Meiji period carved ivory panel, measuring 34cm across,  depicting a hunting party with quarry and deity hunters achieved £3,000 while a pair of mirror-image wrist rests hand-carved with scenes of domestic servitude, one in natural ivory colour to reflect day, the other darkened to represent night, attracted a winning bid of £2,400.

In the furniture section, a 20th century Howard sofa, together with two Howard armchairs, sold for £4,200 while a Regency rosewood centre table by Gillows of Lancaster – originally the property of William Francis Spencer Ponsonby, 1st Baron de Mauley of Canford – achieved £3,600.

A set of five oak dining chairs by Robert ‘The Mouseman’ Thompson of Kilburn, each decorated with trademark carved mouse, sold for £3,400, (read our guide to Mouseman here) while a late 18th century Maltese walnut and olive wood commode attracted many bidders from its country of origin, and will be returning to the island republic.

And with the sale held two days before Remembrance Sunday, it seemed fitting that an important collection of medals made the top ten.

The Distinguished Conduct Medal was won by George Gill West, an outstanding sailor who deserted from the Royal Navy after being denied promotion to officer class, and bribed his way onto a passenger ship to the diamond minds of South Africa.

When the Boer War broke out he joined the Cape Town Highlanders under an assumed name. Showing incredible courage when his camp was attacked by Boer militia – an act of bravery which cost him his life – Gill was recommended for the Victoria Cross, an honour denied because he was a deserter.

His family received the DCM under his real name, and the South Africa medal under his pseudonym. The medals, together with letters and other memorabilia, achieved a winning bid of £3,000.