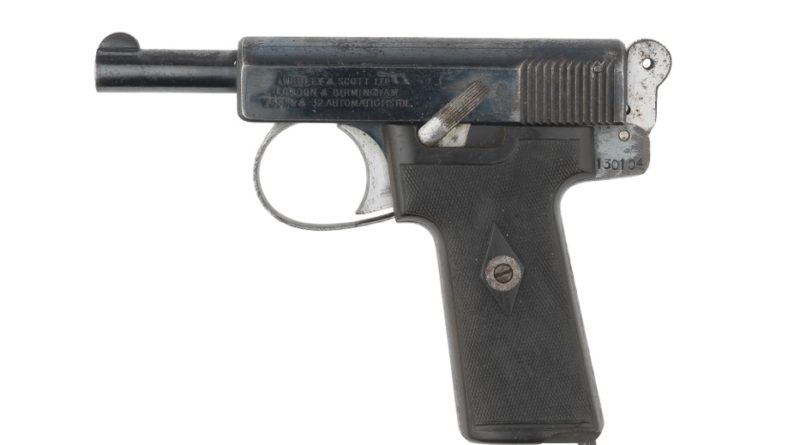 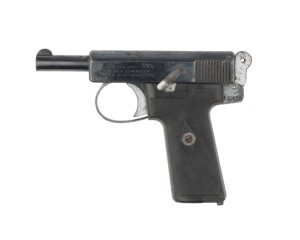 Sir Winston Churchill’s 7.65 mm Webley & Scott pistol, part of his gun collection, is estimated to sell for £2,000 to £3,000 at Bonhams next Sporting Guns Sale on 2nd December in Knightsbridge.

This pistol was one of a number of firearms owned by Churchill while serving as Prime Minister during the war.

Patrick Hawes, Head of Sporting Guns Department at Bonhams says: “This weapon is a remarkable link to Churchill’s war years.”

It is believed that there were some 20 failed attempts to assassinate Churchill during the war, including a bizarre exploding chocolate bar.

One of the alleged attempts against his life is known as ‘Operation Long Jump’ (Unternehmen Weitsprung). This was a plan to simultaneously assassinate Joseph Stalin, Franklin Roosevelt and Churchill at the 1943 Teheran Conference during World War 2. The operation to kill the ‘big three’ was led by the SS. The plot was uncovered by the Soviets and the mission was never launched.

Much blued finish, the left side of the slide of the pistol is stamped Webley & Scott Ltd, London & Birmingham, 7.65mm & .32 Automatic Pistol. The butt has diamond pattern ebonite grips (the left with small chip the right with larger chip missing), magazine missing 3in. barrel, contemporary Birmingham nitro proof.

The pistol is offered with two letters dated 1st and 30th September 1975 certifying its provenance and signed by Sir Winston Churchill’s grandson, Winston Spencer-Churchill MP, a further letter dated 28th May 2015 from Kent Police confirms that ‘Mr. Winston Spencer-Churchill did in fact own a .32 pistol serial number 130104’, in a cardboard carton with Purdey storage label dated 7/1/65 and 17/9/70.

The pistol comes from the private collection of Sir Winston Churchill MP, KB whose collection also included a presentation Sten Mk III sub-machine gun with which he was famously photographed during World War II.

The .32 Webley & Scott was adopted by Scotland Yard for use on close protection details in 1911. Walter J. Thompson, Churchill’s most famous bodyguard, carried one during his eighteen years service beside the Prime minister.