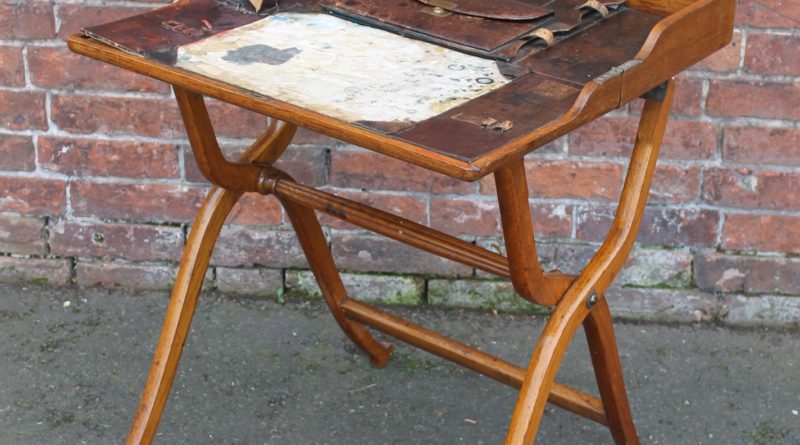 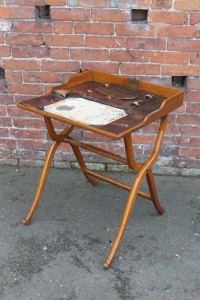 The first is an Edwardian oak folding campaign desk, with the original leatherette interior and brass locking mechanism. Its folding stand  has a fluted stretcher and the piece is particularly poignant as it hails from the WWI period. It is the type desk that would have been used by high-ranking Officers rather than those active in the trenches, but its portability would nevertheless have been essential.

Such desks rarely come under the hammer and, as we mark the centenary of the Great War, Head Auctioneer Ben Gamble anticipates significant interest. He said, “This is a very interesting piece – we have seen campaign desks before but not often, and this one is especially attractive and of very good quality.

“With the huge interest in all things WWI at present, items relating to the era are proving very popular with collectors – this, however, has aesthetics on its side. It would make a very nice addition to any eclectic interior and, due to its compact size and portability would fit equally well into a cool, modern studio apartment or a traditional study.” 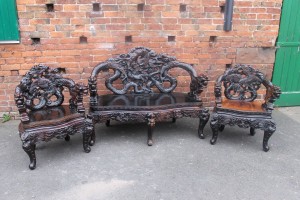 Ben’s second pick of the furniture lots is a Chinese style hardwood carved settee with two armchairs. The furniture has intertwined mythical dragons carved on the backs and arms of the pieces, with each arm terminating with a dragon’s head holding a ball in its mouth. With Chinese art and ceramics currently commanding significant sums at auction, the suite offers an interesting opportunity, the auction house believes.

Ben said, “We’ve seen Chinese works go for significant sums recently, mainly via live internet of commission bidding to China itself where the new generation of young, wealthy entrepreneurs are buying back their artistic heritage. We see a lot of vases and porcelain come through the sale room, but to see furniture is certainly more rare. This is an imposing looking suite, rumoured to have been in Ludlow Castle at some point of its history, so it will certainly be interesting to see what it achieves.”