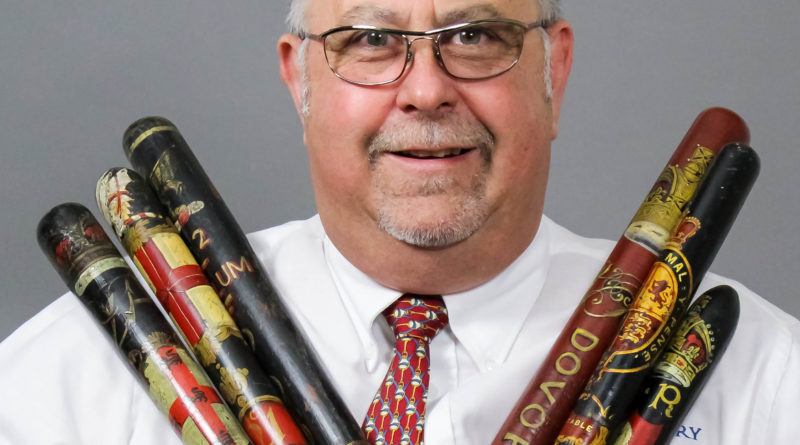 When bank manager Ralph Leyland was named as an executor of the will of one of his customers, little did he expect to be bequeathed an old police truncheon when it came time for him to fulfil his duties. The gift was the spark that ignited a passion.

For the next 10 years Mr Leyland and his wife Irene scoured antiques fairs in the South of England acquiring a fascinating collection of 126 rare antique decorated tipstaffs and truncheons that charts the history of the essential police weapon.

Mr Leyland died in 1998, aged 70, and on Irene’s death last year, the family decided the collection should be sold. It will be offered at The Canterbury Auction Galleries on Wednesday 9th December.

“When my father died, the truncheons were wrapped up and stored in wardrobes and under the bed,” Mr Leyland’s daughter Maria, who lives in Sevenoaks, said. “When my mother died we decided it was time for the collection to be sold so that other collectors could have the pleasure my father did of owning them.”

Rarest among the collection is a 19th century brass tipstaff, the forerunner of the truncheon, the Victorian crown of which unscrews to reveal a container for holding a warrant that the official would have served on the miscreant. It is estimated at £200-300, as is another with a turned ebony handle and brass crown and orb terminal that would have been used by the Bow Street Runners.

A Victorian brass and ebony handled tipstaff, the gilt crown surmounting a gilt plate engraved “Constable 3 Cardiff” is estimated at £300-400, while a George III example painted with the date “1793”, the  “GR3” cipher and the Newcastle Upon Tyne coat of arms is inscribed “J. Rudman Esqr. Mayor” (estimate £120-160)

A George V presentation turned wood truncheon painted with a crown over the “GR” cipher is inscribed “Elstead. Surrey” and “H.R.H King George V. Presented to Inspector F.W. Butt by the People of Elstead – for his assistance during the Coronation.1910”, “God Save the King” and “The Lamb of God” (£120-160).

Rare examples include a truncheon inscribed in gilt on a blue ground “Navigation Constable”, the royal cipher and “S.W.C.” for the Shropshire and Worcester Canal Company (£100-120); another painted with the heraldic device of a griffin over “No.2.Asylum” and the rod of Asclepius to represent healing, (£120-160); and two painted respectively with the crests of Corpus Christi College, Cambridge (dated 1854), and St. Mary’s College, Oxford (together £150-250).

Among others is one painted with the arms of three field guns and the initials “R.G.P.F.”  for the Royal Gun Powder Factory, Waltham Abbey, and another painted with “1867 Lutterworth – Feinian Riots. 1868”.

Four further truncheons have painted decoration indicating they were intended for use by railway police serving on respectively the Bristol & Exeter Railway; the East Counties Railway; the Northern Railway, and the fourth, a George V truncheon inscribed in gilt “G.I. Farrar. 1925” and “Manch & Leeds Railway Co”. To be sold together, they are estimated at £200-250.