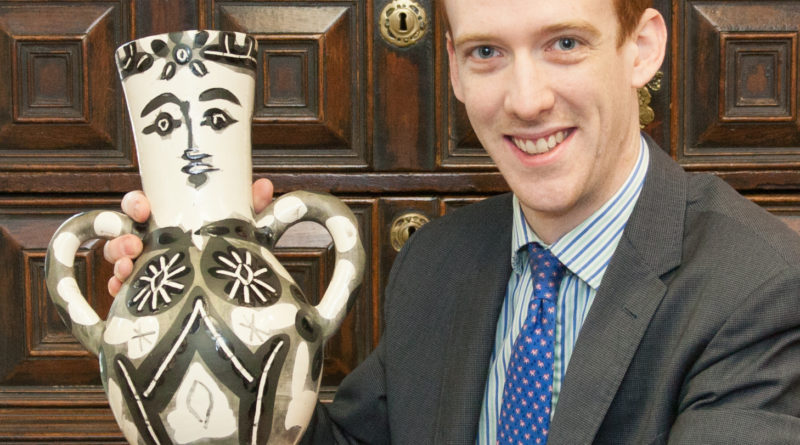 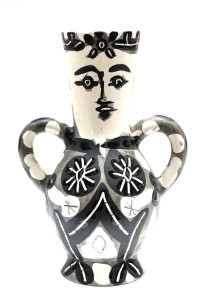 Made in the South of France and uncovered in a home in Littleover, Derbyshire, Charles Hanson said, “It is quite incredible to see what is hidden within four walls of our county. The vase captures the essence of a decadent Picasso in the roaring 1940s when the hub of France carried a license for artistic talent.”

Perhaps the most recognisable and famous artist of the 20th century, Picasso is best known for his abstract oil paintings which sell for many millions at auction. However, with the thirst and competition for his original canvases pushing all but a select few out of the market, collectors have turned to his other works, including prints and ceramics.

Picasso’s interest in ceramics started in the 1940s with a visit to a Mediterranean pottery in the South of France. The pottery, run by the Ramie husband and wife team, was a traditional small scale workshop producing utilitarian as well as some experimental ceramics. Picasso was inspired by the new medium and the opportunity to work in three dimensions. 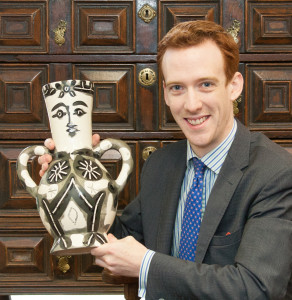 However, instead of creating entirely new forms, he reinterpreted traditional vessels with his two dimensional painting, creating abstract anthropomorphic figures out of utilitarian pots. Picasso spent his summers at the pottery in Madoura for the next 20 odd years, employing their staff to recreate his concepts in painted earthenware editions of up to 500. Although not unique or even painted by Picasso’s hand, they were an authorised and meticulously reproduced invention of Picasso’s imagination.

With collectors such as Richard Attenborough, part of whose collection was donated to the Leicester museums a few years ago and the rest sold at a London auction house, and the general thirst for something with that magic name, prices for Picasso ceramics have increased in recent years. They now regularly change hands at auction for anywhere between £3,000 and £100,000.

Vase Deux Anses Hautes (vase with two high handles) (catalogue number AR141), was conceived in 1952, in an edition of 400. With an estimate of £12,000 – 18,000, the vase, based on a classical vessel of bulbous form with loop handles has been painted to create a female figure, arms on hips. The splayed neck is painted with a face and the foot of the vase turned into human feet. The figurative form hints towards Picasso’s interest in tribal art and totemic sculpture and reinterprets previous ideas used in his 1907 masterpiece Le Demoiselle D’Avignon, in the MOMA, New York.

The vase stands approximately 34cm high. Several examples of this edition have been sold in recent years and prices continue to rise.

The Fine and Decorative Arts will also include works by Rene Lalique, Ferdinand Preiss and Christopher Dresser.