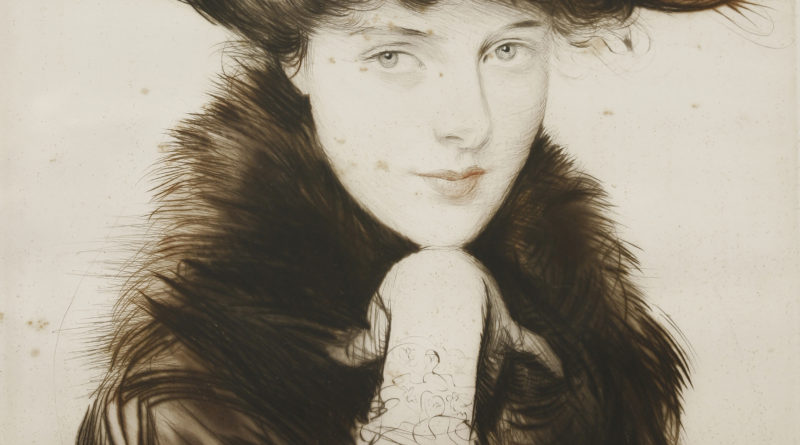 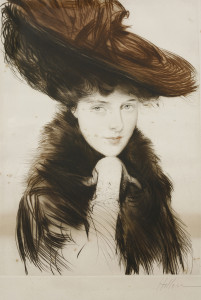 Sworders‘ Country House sale on December 8th will feature a work by Paul César Helleu (1859-1927) with an estimate of £1500-2500, best known for his Belle Epoque portraits of beautiful society women.

Championed by John Singer Sargent, who gave him his start by buying a portrait from him for 1000 francs when Helleu was just 18, the two became lifelong close friends.

Sargent’s influence permeates this portrait of Nancy Beatrice Borwick, Lady Croft (1884-1949), wife of Brigadier General Henry Page Croft, later the 1st Baron Croft, who served as Under Secretary of State for War under Churchill from 1940-45.

Lady Croft, who was also painted by Philip de Laszlo, probably sat for this portrait around the time of her marriage in 1907.

Helleu, who produced more than 2000 drypoint etchings, became a virtuoso of the technique after meeting James Jacques Tissot and recognizing the potential of the technique from the latter’s work.

The etching, which measures 39 x 29.3cm and is signed in pencil in the margin, has been consigned from the estate of Lady Croft’s youngest daughter, who died earlier this year. The family lived at Fanhams Hall near Ware.

“The confident handling of this exquisite portrait shows Helleu at his finest,” said Sworders Director of Decorative Art, John Black. “Like his mentor, John Singer Sargent, Helleu is a master at capturing the spirit of his sitter as she prepares to embark on married life.

“The artist’s use of drypoint allows him to set off the fineness of her features wonderfully against the fluid detail of her clothing, hair and hat. This effect creates a spectacular and vibrant contrast, deepening the sense of poise, calm and beauty in the subject.”