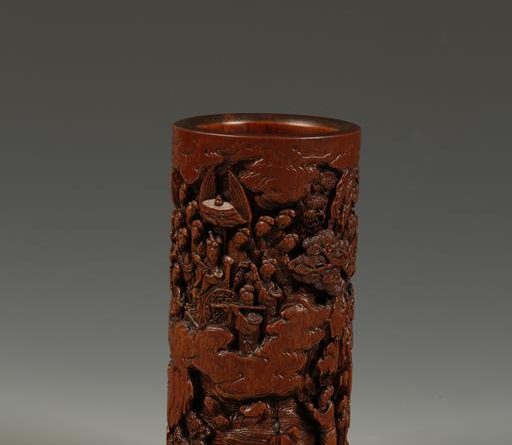 Duke’s of Dorchester’s recent Asian Art Auction was a “spectacular success” according to the auctioneer, with the auction totaling just under £1.2million, tripling the auctioneers expectations. There were only a handful of unsold items.

The opening 159 lots comprised a private collection of Chinese and other East Asian art formed by a member of the Oriental Ceramics Society from the 1950s-90s. Surviving receipts suggested they had been acquired primarily through two London dealers – Spink & Son and later Gerard Hawthorn.

A combination of provenance, modest pricing (and the request for deposits from phone and online bidders) prompted a strong attendance in the room and occasionally feverish bidding, including online from Taiwan, China, Hong Kong, and the USA.

Duke’s new auction rooms were packed, and a battery of telephone bidders were kept busy throughout the day. Lot 1, a rare Chinese Sancai cup from the Tang dynasty set the tone for the auction, selling for £15,860, against a pre-sale estimate of £1000-£2000.

Bidders favoured white jades over earlier material, which would have appealed more to the tastes of 20th century connoisseurs and collectors. Top honours went to a small white jade ‘Double-Quail’ group, beautifully carved during the reign of Qianglong. It sold for £79,000 against a pre-sale estimate of £5,000-£10,000. An exquisite parcel gilt bronze, double phoenix scroll weight, dating from the late Ming or early Qing Dynasty, acquired from Spink in 1977, sold for £51,240, against a modest pre-sale estimate of £1,500-£3,000. Its original purchase price in 1977 was £550. 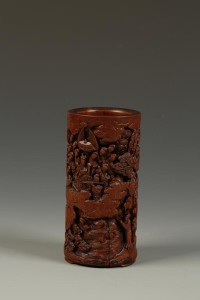 Some of the most spectacular prices, however, were reserved for a group of wooden brush pots, beloved by the Chinese literati class, and now very much in favour with collectors from Asia. A 4½in (11cm) high, 18th century bamboo brush pot (left) attracted multiple bidders before being sold for £70,760. This had been acquired from Spink and Sons in 1984 for £700. The carving was exceptional and the subject matter highly auspicious, depicting the goddess Yaochi Jinmu, or Queen Mother of the West holding court within her palace on the mythological Mount Kunlun.

Duke’s specialist Andrew Marlborough commented, “Despite the slow-down in the Chinese economy, the market remains really hungry for top-quality material, where authenticity cannot be challenged.”