A rare Meissen armorial two-handed beaker and saucer, which once belonged to the Elector Clemens of Cologne, was bought recently at Bonhams’ Fine European 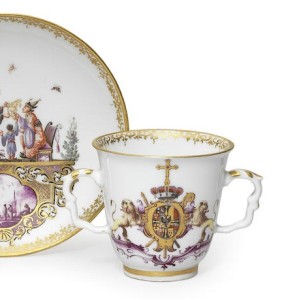 Ceramics sale by the Brühl Palaces Augustusburg and Falkenlust. The UNESCO World Heritage Site, which belonged to the Elector Clemens August of Cologne (1700-1761), is the original home of the service to which this beaker and saucer belonged. Estimated at £50,000-60,000, the lot sold for £74,500.

Bonhams Head of European Ceramics, Nette Megens said, “It’s very satisfying to know that this wonderful beaker is going back to its first home and will be re-united with other pieces from the same service in the Brühl Palaces’ collection.”

The other top lot in the sale was a Meissen Famille verte vase from c. 1735. One of very few examples of Meissen porcelain in the Chinese style, the vase sold for £74,500. 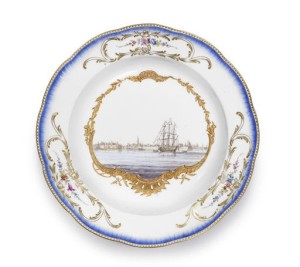 The Palace Het Loo bought a Meissen soup plate for £6,875, more than double the lot’s pre-sale estimate of £3,000-5,000. The plate, made in the early 1770s, is from the service of Willem V of Orange, Stadholder of the United Provinces of the Netherlands. The service consists of 435 pieces which over the centuries have been dispersed across a range of museums and private collections. The plate will now join the Het Loo’s collection of around 170 pieces as, little by little, they bring the service together again.

“It is one of the earliest Meissen topographical services and what we consider the most important related to the House of Orange,” said Suzanne Lambooy, Curator of Glass and Ceramics at Palace Het Loo. “We are particularly excited to add this plate to our exhibition as it is has an exceptional decoration depicting a view of Vlissingen that we did not have before in our collection.” 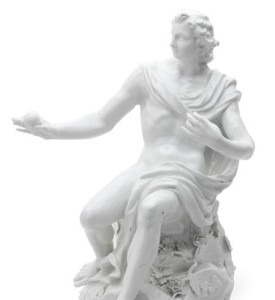 The Victoria and Albert Museum also purchased a large Meissen figure of Paris from a table centerpiece for £4,750.

Reino Liefkes, Senior Curator of Ceramics and Glass at the V&A said: “The V&A is excited about acquiring this Meissen figure, which was originally modeled in 1747 for a grand table-centrepiece in white porcelain which has now been lost. The figure will be acquired with funds from the Capt. H.B. Murray Bequest and will go on display in the Museum’s Ceramics Galleries in due course. A spectacular Meissen centre-piece, also dating from 1747, has recently been restored by the V&A for the Museum’s new Europe 1600-1815 Galleries, which will open next week.”

Armorial Meissen was a further success of the sale. An armorial beaker from 1737 sold for £25,000 and an armorial teabowl and saucer from the service for Christian VI of Denmark sold for £12,500.