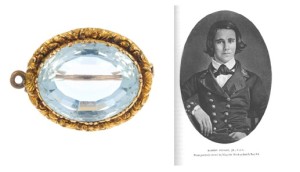 Fellows‘ January auction of Antique & Modern Jewellery will include a rare brooch believed to have been gifted to Ellen Stuart, by her husband General Robert Stuart (pictured) who fought in the American Civil War.

The piece dates from the mid-19th century and features a large oval-shape aquamarine set in an 18ct gold scrolling border. There is a personal engraving to the reverse which reads: “To Ellen Stuart, from General Robert Stuart”.

Robert Stuart fought in various battles for the Union army throughout the American Civil War, being commended for gallantry at Brandy Station, Virginia in 1863 as Lieutenant. He acted as Officer-of-the-day at the Battle of Cedar Creek where he drowned in July 1863.