Trevanion and Dean say that they’ve had a successful first year in their Shropshire auction house, capping it off with their recent December auction. 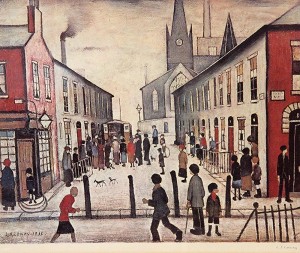 Top lots of the day went to some of the biggest names in Northern art of the 20th century, the first of which was a signed colour print by Lawrence Stephen Lowry (1887-1976).  Consigned by a Cheshire vendor to the auction, the print entitled The Fever Van is one of the many views of Salford painted by Lowry. It is, however, a distinctive work, auctioneer and partner at the firm, Aaron Dean explained that, “While most of Lowry’s paintings are urban scenes and predominantly atmospheric, in this picture, there is a tragic story at its heart.  The  ambulance outside the house is there to collect a fever patient, Lowry paints a stark picture of what was considered an everyday event in the town, it reminds us how hard life was, the sufferer probably had diphtheria or scarlett fever, both widespread in 1930’s industrial Britain before vaccinations rendered them almost extinct.”

The picture attracted great pre-sale interest and Aaron was not surprised that, with the help of three telephone bidders and internet bidders it quickly eclipsed its £1000-2000 estimate before selling for a record £5,100 to a specialist buyer. 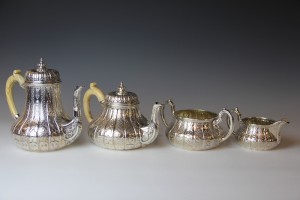 Silver and jewellery performed well thoughout the auction; a silver four piece tea service dating to 1857 by Hunt and Roskell, Late Storr and Mortimer who were goldsmiths and jewellers to Queen Victoria in the 19th century sold for £750.  This was closely followed by a diamond and sapphire ring, destined to go underneath the Christmas tree sold for £800 and a Victorian 18ct gold half hunter pocket watch by Liverpool makers Rob Jones & Sons, proved a timely investment for one buyer at £700.

One of the last lots of the auction was a collection of oak panelling by the sought-after Robert ‘Mouseman’ of Kilburn, which featured two of his distinctive carved mice. Originally commissioned for a church, the current vendor, from Leeds, had bought the panelling 30 years ago and was delighted when it sold for £2,500. 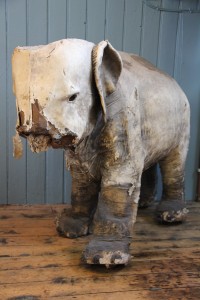 Elsewhere, a rather tatty, but nonetheless sought-after, large elephant calf model was hotly contested, with bidding ending at £420.  The piece had been commissioned by the colourful Pardoe Yates family who owned the Wilton Carpet factory in Wiltshire, and had the piece made for the frontage of Glen Cairn House in Wilton in celebration of a Victorian event, possibly for Queen Victoria being crowned Empress of India in 1877. Auctioneer Christina Trevanion commented. “It was miraculous that our Nelly had survived at all! I think she sat outside rather too long on top of Glen Cairn House, exposed to the elements and as a result had lost her trunk, tusks and tail. We still had all her pieces but they were detached, and what’s great is that the buyer intends to have her fully restored to her former glory.  I wasn’t quite sure who on earth would be able to house her so I estimated £150-250 and was delighted when she sold for £420.” 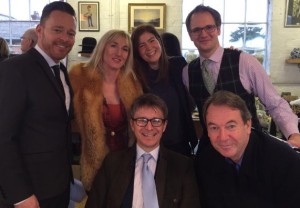 To top off a successful day the saleroom played host to a team from the BBC’s Bargain Hunt, including Antiques Roadshow legend Eric Knowles, along with Charles Hanson, Caroline Hawley, Jonathan Pratt, Natasha Raskin and John Cameron. Eric Knowles said, “It is so great to see two people who have worked so hard realise their dream. There is such a great atmosphere in the saleroom. Christina and Aaron have created not only a fantastic saleroom but an incredibly pleasant place to be.”