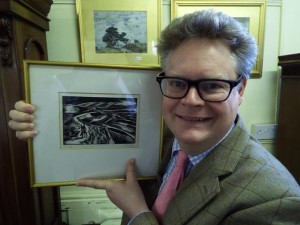 Two woodcut pictures by Paul Nash dated 1922, are estimated to sell for thousands of pounds when they go under the Charterhouse hammer on 22nd January.

“Paul Nash is one of the most important artists of the 20th century and played a key role in the development of Modernist art in England.” Commented Richard Bromell. “Rarely do you see his striking pictures come up at auction, but when you do, they are totally captivating which is why they are so highly contested by museums, collectors and dealers.”

The two woodcut pictures estimated at £2,000-4,000 each, hung in the hallway of an Edwardian townhouse. They were surrounded by dozens of other black and white woodcuts and etchings, most of which are estimated at less than £50 and are also being entered into the s

Born in 1889, Paul Nash studied art at the Slade School of Art. Although he figure painting was deemed weak, he excelled at landscape painting. During the First World War he was an official war artist and produced some of the most iconic images of the conflict.