A 2000-year-old Chinese earthenware model of a horse from the tomb of a wealthy Chinese ruler will be a major attraction when it goes on sale at The Tatton Park Antiques, Decorative & Art Fair from 8th – 10th January. 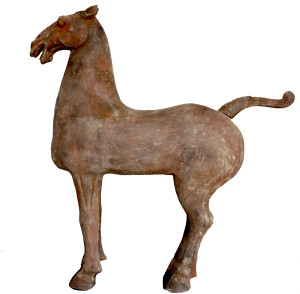 Dating from between 206BC – 220AD, the horse originates from the Chinese Han Dynasty and is a large example of its type at 62cm high. It belongs to dealer Paul Burnett from Bristol who sells antiquities amongst his stock of decorative interior pieces.

Paul said, “This horse is an exceptional find because of its good condition and size. It will appeal not only to collectors of rare antiquities but also anyone seeking a striking talking point for their home. It’s the kind of antique that today is often bought by interior designers.” The horse is priced at £3,250.

The Han Dynasty was one of the longest of China’s major dynasties. It rivalled its almost contemporary Roman Empire in the West. With only minor interruptions it lasted a span of over four centuries and was considered a golden age in Chinese history especially in arts, politics and technology. All subsequent Chinese dynasties looked back to the Han period as an inspiring model of a united empire and self-perpetuating government. 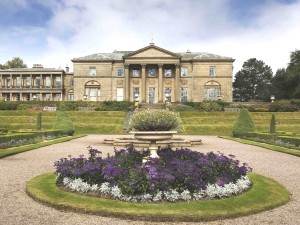 The Tatton Park Fair is a popular three-day event that heralds the start of the antiques season in the North of England and organisers, Cooper Antiques Fairs, says it provides the ideal opportunity to view and buy a wide range of fine quality antiques, decorative period pieces, collectors’ items and original art, all at prices from less than £50 to more than £20,000.

Forty specialist exhibitors from across the Midlands and North of England take part, each showing a range of items, with prices to suit every pocket, from £20 for a glass paperweight to more than £20,000 to an original drawing by L.S.Lowry. 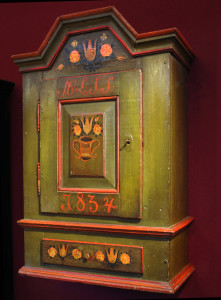 Among the many highlights will be superb collections of antique furniture from specialist dealers Mark Buckley Antiques from Yorkshire and Melody Antiques from Chester. Mike Melody, who is well known for his frequent TV appearances, returns with a wide selection of farmhouse and country furniture from the 17th, 18th and 19th centuries. Highlights amongst the farmhouse dressers, tables and sets of chairs include a rare Victorian child’s chair and a very decorative Bohemian wall cupboard painted in its original green paint, dated 1834.

Mark Buckely has a selection of 19th and early 20th century pieces including a fine Edwardian inlaid Carlton House desk priced at £5,995. Exhibits of 20th century art and design are also featured on the stand of Studiotic who specialise in the British Arts & Crafts movement, British & Continental Art Nouveau, Jugendstil, Secessionist and Art Deco. Fine and decorative jewellery features among several dealers.

Local Cheshire dealers Plaza return, so too Anderson Jones and Candice Horley Glamour who specialises in 20th century pieces from the major European and American designers of costume jewellery. Several exhibitors specialise in fine art, including Manchester dealer Jo Bennett Originals, with works by Northern School painters including Geoffrey Key, (a frequent visitor to the fair), and Richwood Fine Art and Granta Fine Art with 20th century works. Other specialists include Roger de Ville, with English pottery; Jim Dickinson showing antiquarian maps; and D.& M. Chaddock Antiques with metalwork. More than 3,000 visitors are expected over the three days of the fair.