A watercolour by Mary Fedden (1915-2012), entitled Study of a Girl on a Beach, with a Sailing Boat and a Lighthouse beyond, will be part of a Fine Painting auction at John Nicholson’s in West Sussex on January 28th. It is the first time the work has come to the market since the artist sold it to the vendor in 1988. 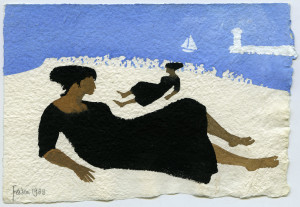 Best known for her colourful still lifes of interiors, flowers and fruit, Fedden’s work attracted a serious following over a career that included a stint as President of the Royal West of England Academy and commissions for both The Festival of Britain in 1951 and Charing Cross Hospital, the latter of which she completed in partnership with her husband, the artist Julian Trevelyan.

A prominent artist at many of the London art fairs, prices for her work have been very strong in recent years.

She studied at the Slade School of Fine Arts, London from 1932 to 1936, then returning to Bristol where she painted and taught until World War II broke out. In 1951, she married the artist Julian Trevelyan. She went on to teach painting at the Royal College of Art from 1958 to 1964, the first woman tutor to teach in the painting school. Her pupils included David Hockney and Allen Jones. She subsequently taught at the Yehudi Menuhin School at Cobham in Surrey, from 1965 to 1970.