A rare 332-year-old book promoting Derbyshire, measuring only 5″ tall and titled The Wonders of the Peak has been uncovered in a box of books. 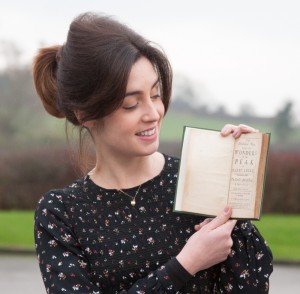 Charles Hanson, Director of Hansons Auctioneers, said, “The book was printed when Charles II was King of England and less than 20 years after the Great Fire of London. The book was over 100 years old before the French Revolution.”

He continued, “The book certainly advocates Derbyshire and the Peak District. The author Thomas Hobbs is noted as being a ‘person of quality.’ It is noted in 1683 that the ‘Darbies Peak does rise as the English Alps.”

The Peak District is described as being ‘a lofty mountain which guards from the assaults of the rough Eastern wind. From the rugged cliffs which shut out the day behind a pleasant garden does appear.’

To promote the Peak District in 1683, the guide remarks on refreshments which can be enjoyed, ‘from the darksome shade by candle light our meats coveyd. Mutton is taken and from tej same sheep mutton is taken and laid. Smoking Lyon is had not drawn from the spit. Rich wine or ale in black pots is drunk. We drink good nappy ale. Tobacco can then drive off sleep. When we arose from sleep to the warm bath and then nine hours sleep.’ 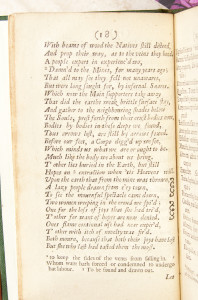 The old rugged tracks of the Peak District are noted in 1683. ‘With weary feet sit is slow and towards a steep hill with a weary strain we can be half breathless. The birds now lazily creep and don’t fly.’

Charles said, “It is wonderful to handle such an old book and we wonder what hands have handled it over the years. In many respects the landscape has not changed in 332 years. We hope the book is competed for by worldwide collectors and walkers who enjoy the Peak may even enjoy reading it before they head out.”

This book forms part of a large collection of books removed from a property in Eyam. Hanson’s book expert Kevin Bucknall remarked, “The collection contains some unique examples and many of the books will appeal to local history groups and collectors who enjoy Derbyshire history.”