A pair of 300-year-old Charles II silver andirons are at risk of being exported from the UK unless a buyer can be found to match the asking price of £541,000. Culture Minister Ed Vaizey has placed a temporary export bar on the silver to provide an opportunity to save them for the nation. 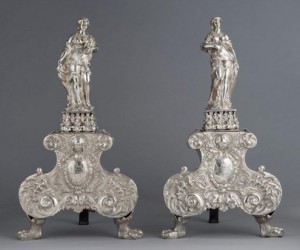 A sought-after luxury item for the wealthy, this set of silver andirons created in 1680 were made to support logs in open fireplaces, and are engraved with the arms of Admiral Edward Russell and his second wife Lady Margaret Russell.

Experts say these andirons are in the best condition of all surviving pairs from the late 17th century and set a new standard for assessing the quality of silver fireplace furniture from the period.

Culture Minister Ed Vaizey said, “These exquisite and rare silver andirons are more than simple fireplace decorations, they give us a glimpse into the homes of the 17th century London elite and the pinnacle of design and fashion fads at that time.”

Dated and hallmarked in London in 1680-1681, these firedogs – which are adorned with iconic historical figures in Egyptian and Roman history Cleopatra and Lucretia – demonstrate the importance of fireplace furniture during the period.  Silver andirons were a short-lived fashion as the introduction of coal in the early 18th century replaced wood as the fuel of choice in wealthy houses.

The decision to defer an export licence follows a recommendation by the Reviewing Committee on the Export of Works of Art and Objects of Cultural Interest (RCEWA), administered by Arts Council England.

The RCEWA made their recommendation on the grounds that the andirons were of outstanding significance for the study of decorative art, furnishing and patronage.

RCEWA member Philippa Glanville, OBE, said: “As the diarist John  Evelyn commented in 1683, superb fire furniture was the latest luxury for a Stuart noblewoman. These firedogs, reflecting light and warmth from the burning logs, gleamed in her darkened bedchamber. They are a rare survival from a period when lavish silver furniture was popular at Court.”

The decision on the export licence application will be deferred until the 10th April 2016. This may be extended until 10th July 2016 if a serious intention to raise funds to purchase the silver andirons is made at the recommended price of £541,000 (plus VAT of £108,200).

One thought on “Can silver andirons be saved for nation?”