Two rare maritime manuscripts sold for a combined total of £2,000 at a rare books auction in Shropshire recently. 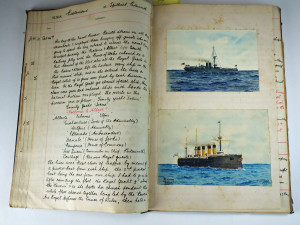 The manuscripts were entered in the auction at Halls in Shrewsbury by a Shropshire vendor whose family purchased them in Cornwall in the mid-1970s. Part of the collection of books in the auction from the same vendor, the manuscripts’ value was enhanced because they contained watercolours and drawings.

Top seller was a manuscript account of a voyage to the East Indies on the ship Duke of Grafton in 1779, which sold to a telephone bidder for £1,500. The manuscript, which contained 116 pages with seven drawings and ran to about 25,000 words, was bound in coarse cloth and, according to a note dated 1931 on the front pastedown, the log may have been kept by Richard Pierce.

The log began: “The Duke of Grafton, East Indiaman, Captain Samuel Bull Commander, left Portsmouth on Sunday the 7th of March 1779 with twelve other Indiamen under the convoy of Sir Edward Hughes Kt. in the Superbe 74 Gunship & eight Men of War and Sloops, Transports & other vessels to the number of Forty five or upwards.” 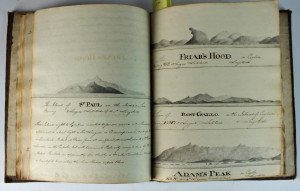 One of the most interesting manuscripts, which sold for £500, was a journal of Midshipman Halton Stirling Lecky, officer on board ships HMS Bonaventure, HMS Victorious and HMS Volage from February 15, 1897 to August 14, 1898.

The manuscript contained 158 pages of notes, 19 plans and track charts and 13 watercolours.

Lecky was a Lieutenant in the Navy, who in 1901 was awarded the Albert Medal, the silver medal of the Royal Humane Society and the Lloyds Silver Medal, all for bravery during the Boer War for singlehandedly rescuing two colleagues from a capsized vessel.

During the First World War, he created the Auxiliary Patrol Service of 3000 vessels against enemy submarines from 1914-’16. He was Assistant Naval Secretary to First Lord of the Admiralty from 1917-‘18 and mentioned in despatches and awarded the Order of the Redeemer (Greece) and Legion of Honour (France) for duties in connection with the war operations in the Aegean.

Other notable prices included £320 for a 1908 first edition of Kenneth Grahame’s ‘The Wind in the Willows’ and £300 for a 1581 Geneva version of the Bible by Christopher Barker.

A large scale hand-coloured map of Spain and Portugal, including Algarve, May 1, 1823, by James Wyld sold in the room for £180 while ‘The Beauties of the Bosphorus’ by Julia Pardoe, dated to around 1840, sold on the Internet for same price.

Halls’ books consultant Christopher Moore said: “Following good pre-sale interest, the auction attracted a lot of Internet bidding and I was pleased with the prices achieved for the two manuscripts and several other lots. Generally, the market for quality rare books is very good.”