Christie’s, the world’s leading art business has announced its 2015 sales total £4.8 billion, down 5% for the same period in 2014.  The results are the second highest total in company history. 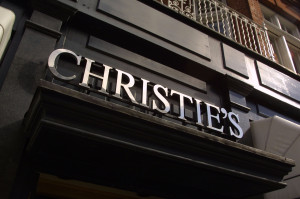 Christie’s said that demand from global buyers remained consistent at both the highest end of the market as well as in a diverse range of collecting areas and price levels.  Notable successes included the record-making sale in New York in November of Amedeo Modigliani’s Nu couché for $170.4 million and the highest day-sale totals seen during our corresponding 20th Century Sale week, reflecting continued strength in this core area of the art market.

Patricia Barbizet said, “Last year saw continued strength in the art market and showed that there is breadth of demand across geographies, categories and price ranges. Amidst an increasingly challenging global financial environment we are in a strong position to adapt to the marketplace and well equipped to service the new, broader, geographically diverse audience for art.”

She added, “It is also encouraging that new buyers represent 30% of our total buyer base, coming to us through our curated auctions, various categories as well as digital sales.”