Cheffins is to sell an unusual Regency mahogany ‘chamber horse’, designed to imitate the up-and-down motion of horseback riding. 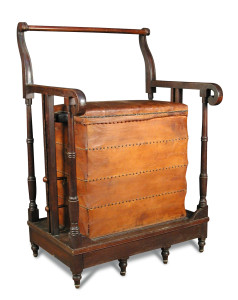 Cheffins said that the exercise equipment was “especially fashionable among the over-indulgent upper and middle classes who would bounce up and down on the chair to burn off the effects of their rich diets.” The exercise was regarded as a cure for many ailments when one was not physically able to ride a horse.

The chamber horse was invented as early as 1740 by Henry Marsh of Clare Market and widely used throughout the 18th and early 19th centuries. It was so popular that a version was made as a nursery ride for the children of King George III and it could even be rented at apothecary shops for six cents an hour.

It was notably illustrated in Thomas Sheraton’s Cabinet-Maker and Upholster’s Drawing Book in 1803. Similar examples can be found in the Victoria and Albert Museum, London, and in the National Trust Collection at Belton House, Lincolnshire.

This Regency mahogany chamber horse will be sold in Cheffins March Fine Art auction with an estimate of £400-600.