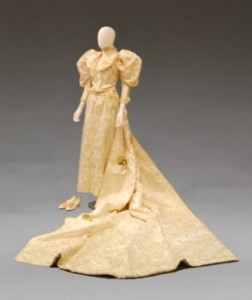 The Olivers were married in 1956 and moved into a large Edwardian house in Gravesend. At a time when fireplaces were being ripped out and paneled doors were being skinned with hardboard, theirs was a house that gently filled objects of yesteryear. All manner of collectibles; pocket watches, match cases, furniture, glass and porcelain which had fallen out of fashion at that time lined the shelves in a house.

Although both primarily worked as teachers, their joint passion for the theatre resulted in their collecting and making theatrical costumes and from this, several original dresses were salvaged which formed the core of the collection. Period fashion shows were held to raise money for local charities; this drove the building of the collection with many donated items and the scouring of charity shops often resulting in some stunning finds. The demise of a local milliner and the closing of a gentlemen’s outfitters brought further treasures.

The comprehensiveness of the collection is a tribute to their passion; many dresses being fully accessorised with gloves, shoes, stockings, hat pins, parasols and bags.

When Frank died in late 2011, the collection was left, wrapped in tissue and laid in long florist’s boxes each bearing the name of the lady who had modelled the contents, until Dorothy’s decision to liberate it.