A late Charles II trefid spoon, thought by its Somerset owner to be worth only about £100, dished out a big surprise at Lawrences Auctioneers recently. 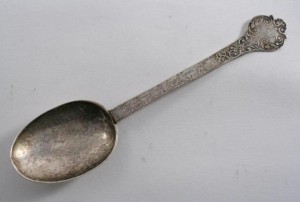 Lawrences’ specialist, Alex Butcher, said, “It is a rare spoon dating from the reign of King Charles II. It was made in London in 1683 and is engraved with the legend `This Spoon was bought upon the Frozen Thames* January:28:1683/4`, which makes all the difference to collectors.”

Novelty spoons with a history that links them to such a specific time and place in such unusual weather conditions can be very appealing, and this 7.75”  (19.5cm) spoon certainly proved so.

Alex explained, “Eight frost fairs were held on the Thames between 1607 and 1814; the first recorded frost fair was in the winter of 1607/08. The frost commenced in mid December, and by mid-January the ice between Lambeth and Westminster was firm and thick enough to allow a large number of people to walk on it in perfect safety.”

Booths were set up on the frozen river selling fruit, food, beer and wine, while shoemakers and barbers plied their trade on the ice, alongside sports such as bowling, shooting and dancing. The spoon was made during the winter of 1683/84 when the frost lasted from December to early February, although the fair was confined to the second half of January.

Alex said, “A printing press was set up on the ice and the practice of having their names printed with the date and the phrase ‘printed on the Thames’ became so popular with the people that the printer made a small fortune. Even King Charles II and his family visited the frost fair and had their names printed on a sheet of paper by G Groom on January 31st 1684, just three days after the date on this spoon.”