Sworders Auctioneers of Stansted Mountfichet, Essex, will offer an archive of 23 official Dardanelles photographs giving a fascinating picture of life at the front during the Gallipoli Campaign a century ago. 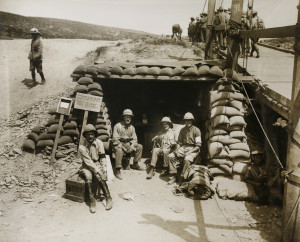 Published by Central News, the photos mainly depict Suvla on the Aegean coast, scene of such incompetence on the part of the British commander, Lieutenant-General Sir Frederick Stopford, that he was dismissed.

They can be dated to the period between the end of April 1915, when military landings at Gallipoli began, and the beginning of 1916, when the last of the Allied troops were evacuated as the campaign failed.

The series also focuses on William Bagnall, a second lieutenant with the 12th Scottish Rifles who transferred to the Royal Flying Corps as a pilot in 1916 after Gallipoli. He is depicted both at Gallipoli and later as a pilot.

Additional documentation reveals that Bagnall graduated as a pilot at Oxford on November 2nd, 1916, completing his advanced training, including learning how to fire Vickers and Lewis guns, on January 26th, 1917. 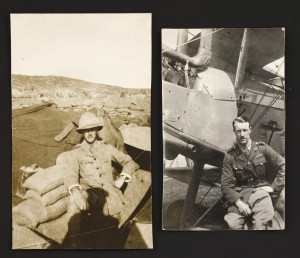 On June 3rd that year, he was posted to Filton Aerodrome in Bristol, finally being discharged from what had become the RAF on September 15th, 1919, by which time he was at the newly built RAF Narborough near Swaffham in Norfolk, which itself closed at the end of that year.

A newspaper cutting that accompanies the documents reveals that Bagnall came close to disaster at one point. Under the headline AVIATOR’S MISHAP NEAR DURHAM, the undated article reads:

On Sunday mid-day, Lieut. W. Bagnall, whilst flying from a Yorkshire aerodrome to the North, was compelled, owing to engine trouble, to descend in a field just outside Durham City. The machine landed safely in a field, but, catching a belt of fir trees before it came to a standstill, was overturned and considerably damaged.

Happily, however, Lieut. Bagnall escaped unhurt. He became the guest of Captain J.E Rogerson, recruiting officer for Durham, whose home at Mount Oswald, is close by.

During the afternoon thousands of people from Durham and neighbourhood went to see the damaged aeroplane.”

“This extraordinary collection of photographs and ephemera gives a unique glimpse into the life of a particular serviceman as he progressed through the First World War,” said Sworders managing director Guy Schooling.

“It also brings us face to face with the reality of life at the front on the disastrously mismanaged Gallipoli campaign. The observable level of detail in each photograph, together with the fact that these were official images published by the Central News agency, makes them very significant historical documents. Were these produced as propaganda to show that all was well and the British expeditionary force was well equipped?”

The archive will appear as a single lot in Sworders’ March 1st Country House sale, estimated at £600-£800.