The Antiques & Fine Art Fair returns to Harewood House, near Leeds on Friday 10th to Sunday 12th June this year.

Taking place over the weekend of Her Majesty The Queen’s 90th birthday, many of the exhibitors are bringing items with regal connections, including a pair of Royal Brierley Crystal presentation goblets made to commemorate the 1937 coronation of the Queen’s father, King George VI, priced at £500 the pair from Mark J West. These would have been made rather hurriedly, following the abdication of his brother, King Edward VIII. 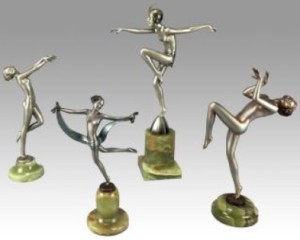 Freshfords Fine Antiques is bringing a Regency George IV amboyna and rosewood side table, attributable to Morel and Seddon, c1826, £14,860. George Seddon formed a partnership with a cabinetmaker and upholsterer Nicholas Morel to fulfil one of their contracts: to make furniture for Windsor Castle. They worked almost exclusively for the crown, particularly at Windsor, but also at other royal residences. An exceptionally rare pressed horn snuff box has a lid modelled after the portrait of George I painted by Sir Godfrey Kneller and still bares traces of the original gilding, c1714-27, £765 from JA Yarwood Antiques.

Exhibiting for the first time, JA Yarwood Antiques from Skipton is also showing a collection of fine quality Japanese items, including a late Edo – early Meiji period hand carved ivory netsuke showing Ashinaga and Tenaga, signed, Japan, c1860, £3,785. Ashinaga and Tenaga work together as fishermen on the sea shore. Ashinaga carries Tenaga out into the sea on his long legs where Tenaga is able to scoop fish from the water with his long arms. This unusual depiction of the two shows Tenaga as a child. 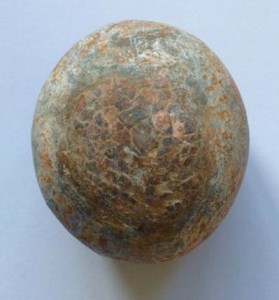 Another new exhibitor, Timewise, joins the fair with a selection of watches including a vintage Rolex Oyster Precision steel watch with a white dial in the sought-after ‘Explorer’ design, priced at £2,790. Sticking with timepieces, clocks always bring a room to life and F J & R D Story Antique Clocks has a diverse collection catering for most tastes, amongst which is an English double fusée bronze and ormolu mounted mantel clock by F Baetens, London, c1825, priced at £5,950 and a fine quality figured walnut longcase clock by William Allam of London, c1750, £12,000. Examples of Allam’s work were exhibited at the Guildhall Museum in London, founded in 1826.

Dating back around 70 million years, the oldest piece to be found at the fair is a dinosaur egg, measuring around 15cm, £550 from antiquities dealer Odyssey. This impressive fossilised egg is from a Therizinosaurus, which roamed the earth during the late Cretaceous period. 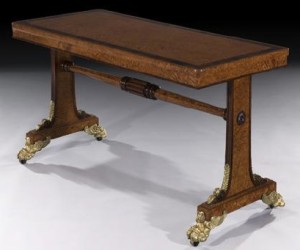 Jack Shaw & Co returns with a fine collection of silver, including a pair of French claret jugs by the renowned Parisian silversmith Emile Puiforcat, c1880, £4,500 and a pair of old Sheffield plate wine coolers, c1825, £3,500. Summer brings out the insects, but bees and spiders set in gold with precious stones, c1890-1900, priced at £885 from T Robert, should be more welcome.

Visitors to the fair can also benefit from access to Harewood’s magnificent grounds, transformed from agricultural fields by Lancelot ‘Capability’ Brown from 1776 to 1781, and Below Stairs, but for just £5, they can also visit the State Rooms and exhibitions. The Art of Landscape is a full and fresh assessment of the cultural influence of the ‘Capability’ Brown design, whose 300th anniversary since his birth is celebrated this year at Harewood. Visitors can explore the innovation made by artists across the centuries including works by the great masters like JMW Turner, Cotman and Girtin, as well as photographs by pioneering Victorian photographer Roger Fenton, who captured the Brownian views in 1860. A contemporary response by Simon Warner will take you through the landscape in a new film titled North and South.