Lawrences’ bi-annual auction of books, maps, manuscripts and photographs in Crewkerne comprised a vast assortment of lots and their recent sale had the added benefit of containing the principal contents of two fascinating libraries that boosted the auction total to one of the highest of recent years: Limington House, near Yeovil yielded 61 lots that made £29,180 and Cefntilla Court in Monmouthshire yielded 95 lots that made just under £50,000.

Early surprises included the 1830’s game of The Tour of Dr Syntax in Search of the Picturesque, an unusually complete parlour game inspired by the ill 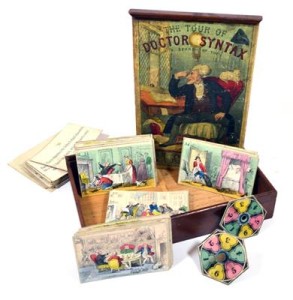 ustrations of Thomas Rowlandson. Especially rare for being so complete after nearly 200 years, the game made £2,920. Two superb lots of photography re-established  the firm’s successes in this field (Lawrences achieved £173,000 for a group of photographs by Felice Beato in January 2014). This time, an album of 79 photos of mainly amateur photographs of 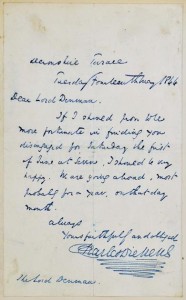 China and Peking dated to about 1887 and took £4,020, whilst an important series of 24 late 19th Century large panoramic views of Kashmir by Vishi Nath attracted considerable interest from international collectors. The lot had been found in a cupboard at Limington House and its potential was recognised immediately by Book Specialist, Robert Ansell. It was bought on the telephone by a Continental bidder for £10,980.

From the library of the Lords Raglan at Cefntilla Court, Monmouthshire came a lot containing a diary by Lt Col. R. E. A. Hamilton relating his travels from Kuwait in late 1917. With eight other volumes in the lot, the price soared to £17,080. An album of important autograph letters  contained letters from Charles Darwin, Rev. Charles Dodgson (`Lewis Carroll`), Charles Dickens, Florence Nightingale and Sir John Everett Millais. The album had passed by descent in the family of Sir Richard Bagallay and Violet, Lady Bourdillon, wife of the Governor of Nigeria. After determined bidding, the album was bought for £14,640. A further highlight towards the end of the 520 lot sale was a collection of letters and documents from the archive of the publishers and booksellers Cadell and Davies. This just exceeded its high estimate to make £5,360.