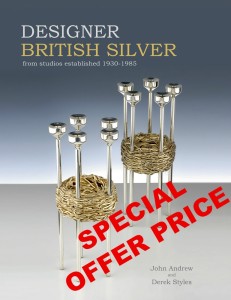 We’ve got a brilliant offer for lovers of silver and design, courtesy of our sister company, ACC Art Books.

Our informative and in-depth book Designer British Silver is now available at a special offer price of just £39 (normally £75). Order your copy here and enter the code DBS39 at the checkout to get the discount on your purchase.

But you’ll need to hurry as this offer only runs until March 24th!

Designer British Silver explores the designer-silversmiths who have shaped British silver from the 1950s through to the present day. Covering a complete generation of craftsmen and women, and featuring one-to-one interviews with key figures, the book reveals the people and forces behind the post-war Renaissance that made Britain such a centre of excellence for designer makers in silver.

The fifty leading figures are covered in-depth, from Malcolm Appleby to John Willmin. Detailed insight is provided on the life and works of each maker, alongside lavish illustrations and extended captions telling the story of every remarkable piece of silver. Designer British Silver also includes a fascinating overview of the post-war revival of British silver, a section on where to view designer British silver and additional listings of designers, craftsmen, silver manufacturers and engravers.

You can read a free sample Designer British Silver here.