The collection of more than 500 pieces of rare early English porcelain collected by the late Barry Lomax sold for a total of  £25,570 in a sale at Nantwich, Cheshire, auctioneers Peter Wilson.

It comprised study examples of from the factories of Bow, Lowestoft, Caughley, Coalport, Liverpool, and Newhall and its imitators, the most valuable among them being a teapot made at Seth Pennington’s Liverpool factory in about 1770. It sold for £750, a multiple of the estimate.

Two large mask jugs, circa 1780-85, from the obscure Staffordshire Baddeley-Littler factory located in Shelton, between Hanley and Stoke-on-Trent, sold on estimate for £700 and Vauxhall teabowl and saucer, painted with a figure on a bridge in an Imari pattern sold for £600 against an estimate of £250-350. 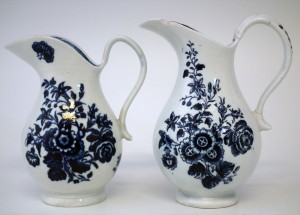 Mr Lomax, formerly an IT specialist from Chorley, Lancashire, started collecting by chance but spent hours studying the subject that fascinated him to the point where he was giving talks and holding seminars attended by museum curators and specialists. A leading light in the Northern Ceramics Society, he died in 2013 aged just 65. 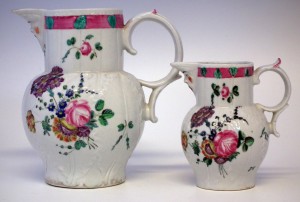 A further highlight of the English ceramics section of the sale was an unusual Moorcroft Florian vase, circa 1904, decorated with the White Hazledene pattern probably for the retailer Townsend & Co, Newcastle on Tyne. The vase had Moorcroft’s painted signature on its base and measured 24.5cm high. It sold for £3,500, against an estimate of £1,000-2,000.

Peter Wilson ceramics specialist Chris Large said the high price was achieved because the piece was a rare colour variant of an equally rare and desirable pattern.

A surprise among oriental ceramics was the £10,000, paid by a Mainland Chinese buyer who had sat patiently through the sale, for a pair of Chinese Guangxu vases painted with figures in a landscape, height 34.5cm. The vases were offered with a cylindrical jar and cover painted with birds and foliage, height 22cm, the cover restored professionally.

In the paintings section of the sale, Northern artists generally and L.S. Lowry in particularly, continue to power bidding. Top lot was Lowry’s pencil sketch titled “Clifton Moss Farm”, signed, initialled and dated 1961, 13.5 x 18cm (5.5 x 7in), which sold on estimate to a private buyer for £10,000.

Among 19th century pictures, Charles Spencelayh’s “Old Nicotinus”, a watercolour of an old man loading his churchwarden’s pipe from a tobacco jar under his arm, sold for an above estimate £5,400. It measured 18 x 13cm (7.25 x 5.25in).

The sale also uncovered some fascinating and valuable collectors’ items, the most exotic of which was a 14ct gold cigarette case, the front enamelled and jewelled in rose diamonds and sapphires with the coat of arms of the Ottoman Empire. The tughra (calligraphic signature) in the design related to the empire’s 34th Sultan, Abdul Hamid II, whose despotic reign from 1876-1909 led him to be called Abdul the Damned. The box measured 9.7 x 8cm, weighed 110.1 grams and sold for £7,500 against an estimate of £3,000-4,000.

Equally valuable, but somewhat more utilitarian, was a Louis Vuitton steamer trunk, its leather wood and brass stud construction indicating it dated from the late 19th or early 20th century. Estimated at £4,000-5,000, it sold for £7,600.