A rare set of three Dyraaba King Plates from the late 19th century or early 20th century fetched an impressive £19,500 at Sworders’ recent Spring Country House Sale held at the start of March. The trio of plates has been in the same collection in the UK for the last fifty years.

Dyraaba, known as Dyraaba Station, is a district in northern New South Wales renowned for its cattle grazing country. It is about five miles east of a regional town called Casino, which is a central hub for the Richmond River grazing lands. The area was settled in the 1840s by pioneers establishing cattle stations. 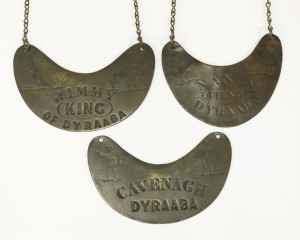 The practice of awarding king plates by colonial settlers was derived from the earlier French and English usage as military rank insignia, made in gold and silver, which was abolished during the 1830s.

The English adopted the tradition in the early 1800s and the first Australian king plates were awarded to aboriginal people in Parramatta, about 20 miles west of Sydney. These were given by the New South Wales Governor Lachlan Macquarie as a peace offering, and many hundreds more were issued over the next century as the frontier of colonial settlement expanded outwards from Sydney.

The colonial government of New South Wales distributed them via regional representatives to pioneers and early settlers. They awarded them to the leaders of aboriginal tribes who assisted them or to individual aborigines who rendered assistance. The recipients were in the main pleased to wear them, which enabled the settlers that followed to easily identify the aboriginals who could provide help from those who may be hostile.

The Dyraaba king plates probably date from the late 19th century or early 20th century and were probably associated with the establishment or expansion of Dryaaba Station. The aboriginal clan group which traditionally inhabited the Dyraaba area were the Bundjalung people. They occupied a territory of around 1500 square miles to the south, north and west of Casino.

The names inscribed on this set of king plates – such as ‘Jimmy’ or ‘Nancy’ – were nicknames of English origin, usually given because they sounded similar to the individual’s native name. Similarly, the location names, such as Dryaaba or Walloon, were the pioneers adopted name for a region, often an anglicised version of the local indigenous name. 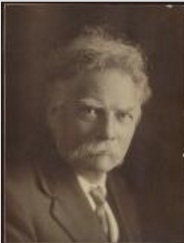 Australian writer Edward Sylvester Sorenson (1869-1939) who was renowned for his depiction of ‘outback life’ was born in Dyraaba and spent his childhood growing up in the region before eventually becoming apprenticed to a carpenter in Casino.

In an article in the Richmond River Herald and Northern Districts Advertiser in 1921, he wrote of his memories and early life which mentions, ‘my nurse was Nancy of Dyraaba. I have forgotten her, but others told me I used to cry for her when her work was done and she took up her dillybag for home’. This may or may not be the same individual as the name on the ‘Queen’ plate.

In the collection of the National Museum of Australia there are only two ‘Queen’ plates. It is also uncommon to have a group of three from one place. ‘Cavanagh’ is thought to be a stockman.