A collection of Savile Row suits that belonged to a man who dressed the stars, and vintage sunglasses that belonged to his make-up artist wife are expected to attract international interest when they go under the hammer in Newcastle. 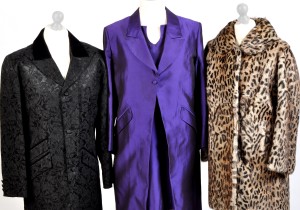 The collections are part of the new fashion and textiles section in the Anderson & Garland Town and County sale on March 9th. The William Hunt and Charles Tyrwhitt suits belonged to the late Gary Kingham, and sunglasses, including pairs made by Ray-Ban, Mulberry, Christian Dior, Jean Paul Gaultier and Gucci, were collected by his wife Sheila, who often used them to style models for fashion shoots.

Gary was born in Coventry and trained in tailoring, before moving to London in the 1970s for the bright lights of the King’s Road and Carnaby Street. During his career, he dressed a huge number of celebrities, including David and Victoria Beckham, Gary Lineker, Ronaldo, Rio Ferdinand, Jonathan Ross, Graham Norton, Tom Jones, George Michael, Robert Plant, David Soul and Antonio Fargas.

Gary worked in tailoring, buying and store management, including Reiss during its early years in the mid-80s and setting up the Charles Tyrwhitt suit department. He also championed William Hunt, which caters to the flamboyant end of Savile Row’s clientele. The brand famously established itself in the New Romantic era, dressing bands Spandau Ballet, Heaven 17 and ABC, and providing the look adopted by TV presenter Laurence Llewelyn Bowen in the 1990s.

Although Gary’s life was mainly-London based, his suits are being sold in Newcastle because the anonymous vendor has a home in the North East. The vendor said: “Throughout his career he was heavily influenced by the Mod era (first time) and soul music.  He was friends with Paul Weller, who he dressed from time to time. 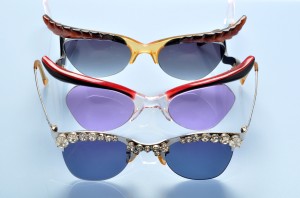 “Gary was a larger than life character, well known around the West End.  He was a mentor to many young tailors, for example Phoebe Gormley, of Gormley and Gamble who was recently profiled in The Times. He always was dapper. It was extremely rare that he was not in a suit – even on days off.

“The sunglasses come from his wife’s collection.  She learnt her trade in the shops in London, Harrods, Selfridges, Biba, Browns etc.  She went freelance in the ’80s and developed a successful business in making up models for fashion shoots for a range of clients.  The sunglasses were a personal obsession, but also were used as props for the fashion shoots.”

The suits and sunglasses will be a central part of the Anderson & Garland sale, which also includes Victorian dresses, a Givenchy 1950s jacket, top hats, militaria and fashion drawings.

Anderson & Garland auctioneer and textiles specialist, Phoebe Hoare, said, “Anderson & Garland are always striving to generate new markets. The demand for vintage and retro clothing is encouraging, I think the Gary Kingham collection and other items offered in this sale will set a benchmark for the future.

“I think there will be a lot of interest from dealers and private collectors, particularly with the vintage sunglasses.”

The vintage clothing and accessories section of the Town and County sale is a new development for Anderson & Garland, which is aiming to make it a regular part of the auction on a quarterly basis.

The monthly Town and County sales include collectibles and curios from around Northern England and the Scottish Borders.