A pair of important polychrome marble portrait busts depicting Cicero, civic hero of the Roman Republic, and Horace, the famed poet, are to be offered for sale at TEFAF after extensive research by Tomasso Brothers Fine Art reunited them. 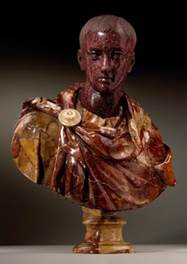 Carved in the same seventeenth century Roman workshop, the busts have an illustrious provenance.  Originally part of the Valletta collection in Naples, they were acquired around 1721 by Thomas Herbert, the 8th Earl of Pembroke (1654–1733) for his family’s splendid residence, Wilton House, near Salisbury, one of England’s finest stately houses. 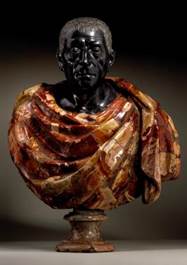 For more than two centuries, the busts were displayed at the heart of one of the finest private art collections ever assembled in Europe.  They flanked the main chimneypiece in the Earl’s ‘sanctum sanctorum’ of the Great ‘Double Cube’ Room designed by Inigo Jones, amongst family portraits by Sir Anthony Van Dyck, and works formerly in the esteemed collections of Cardinals Mazarin and Richelieu, King Charles I of England and Thomas Howard, the 14th Earl of Arundel.

Pembroke’s influence on the tastes and collecting trends of the aristocratic English in the early eighteenth century were considerable.  When he embarked on his Grand Tour in 1676 and set about building a collection in the 1680s, he was all but alone.  Yet the fame of the galleries at Wilton House spread amongst the aristocracy, and by the time of his death in 1733, many of England’s great country houses were beginning to be decorated with antiquities, renaissance and baroque sculpture.

The history of this pair of busts is inextricably linked to some of the most important European art collections ever assembled, the rise of ‘The Grand Tour’, and thus with the history of art collecting.