Over the course of 2016 Tennants will be auctioning a private collection of knitting sheaths or sticks, which has been formed by a couple from Hartlepool over their lifetime. 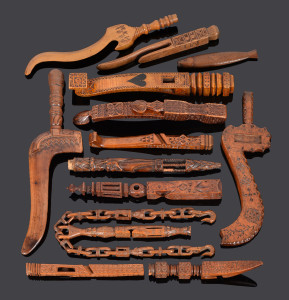 Sarah White, Textiles specialist at Tennants said, “This is a rare opportunity to explore our social history and see such a variety of over 50 sticks in differing styles and dates, the earliest being late 17th century.  The majority of the pieces were bought in the North East of England, including colliery areas such as Ryhope and Sunderland.”

Knitting sheaths or sticks were found in nearly all lower and working class family homes from the 18th to late 19th centuries and were usually carved by hand, with some later examples turned by lathe.  The very first were seen in the 16th century and used by every member of the family; men, women and children, and were an essential everyday object.

Sheaths were used to mend and darn socks, gloves, hats and wool items; more importantly they were used to supplement their incomes by making and selling socks.  These sewing tools were found mainly in rural areas in Wales, Yorkshire, Cumbria, Scotland and Northumberland, the majority were made in wood; other materials included leather, metal, bone, straw and quills.

They were used by placing the end of the stick against the right hand hip, tucked into the waistband, or belt, at an angle, so a double ended knitting stick could be placed in the ‘haft’ – hole, at the opposite end, which was about 1” deep.  This therefore secured the knitting stick, and freed the right hand so the knitter could knit at speed, also whilst standing or walking.

The items form a fascinating part of our rural social history and specific information can be gleaned from the decoration used.  For example, some designs are specific to particular regions, such as the Goose Wing or Gull Wing favoured in Dent and the Yorkshire Dales. Often sheaths were given to loved ones as tokens of affection, incorporating hearts, inlay, chip-carving, painted decoration, dates and inscriptions into the designs.

The collection at Tennants comprises a range of sheaths including one exceptional example; a chip carved stick dated 1775, initialled MN, with two chains hanging to each side, and a cage to the top incorporating a wooden ball. Carved from a single piece of fruitwood, it is expected to realise between £400-600 at auction. Other gull wing/goose wing examples made of primitive treen will be going under the hammer with more affordable estimates of £80-120.

The first part of the collection goes under the hammer on Friday 29th April, as part of the Vintage Costume, Textiles, Dolls & Teddy Bears Auction, 10:30am.