A Ming style, blue and white garlic mouthed bottle vase (Daoguang mark (1821-1850)) in David Lay’s March 10th Antiques Sale lived up to early expectation and attracted attention from savvy Chinese collectors due to its quality and knowledge that it was probably made to adorn the home of a nobleman or a Chinese palace.

It was once owned by a savvy English art dealer, Cecil Doward, a real life Biggles, who knew a thing or two about quality and was the former owner of Gainsborough’s house in Suffolk. However, in more recent times it had been inherited by a relative and when David Lay first saw it, it was tucked away in the corner of a shipping container in Redruth where items inherited from Cecil were being stored and the owner had no idea it was of any particular value. 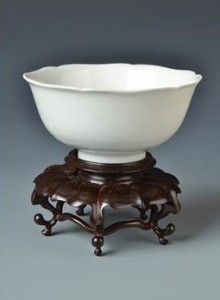 David, however, knew that it could be something special.

It was a tense bidding war in the Penzance Auction rooms as telephone bidders from London and mainland China competed fiercely with online bidders for the 19th century vase. It eventually went to a London trade buyer.

This was not the first exciting Chinese lot of the day as a Chinese Yongzheng white porcelain moulded lotus flower bowl in Ming Yongle style, again of the highest quality, had already caused a huge stir when it sold for £22,000 over its £2000-3000 estimate.