A Victorian Great Western Railway station clock, estimated at £2,000, is up for grabs in the Charterhouse collector’s auction this Friday. 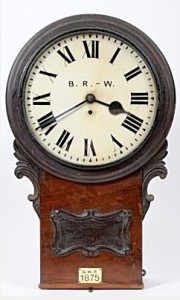 Auctioneer Richard Bromell said, “Rare do you see station clocks, let alone one which can be identified to a particular station. These station clocks were usually fitted with a single fusee movement which always kept good time, something which was important to the train companies.”

The GWR clock hung in Wiveliscombe train station near Taunton in Somerset for many years. During this time, the dial was re-painted from GWR to British Rail (Western), probably in the late 1940s, just after GWR was nationalised in 1948.

The owner of the clock inherited it from his uncle who was station master at Wiveliscombe. The uncle bought the clock after the station closed in 1966 for an unknown sum, but Charterhouse in Sherborne has estimated it at £1,500-£2,000C.