An extremely rare gold medal commemorating the victory of the British Fleet at the Battle of the Glorious First of June in 1784 during the French Revolutionary Wars is to be sold at Bonhams Medals, Bond, Banknotes and Coins sale in London on 23 March. It is estimated at £140,000-160,000. 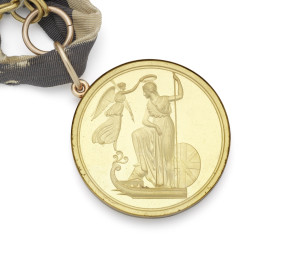 The medal was awarded to Admiral Lord Graves as captain of HMS The Royal Sovereign and was one of only seven large gold medals struck to mark the victory.

Bonhams Director of Coins and Medals, John Millensted said, “This is an incredibly scarce and desirable medal in excellent condition and its rarity is reflected in the high estimate. I expect it to have wide appeal to collectors all over the world.” 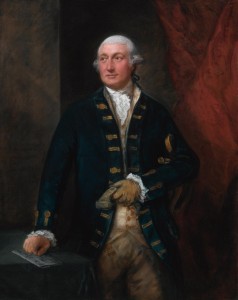 of Revolutionary France. The encounter was sparked by British attempts to prevent a grain convoy from America reaching France. The  population was facing the threat of starvation as a result of poor harvests and the successful blockading of many French ports. Although both sides suffered losses and the grain convoy got through, the victory – both on the day and in the longer term – belonged to the Royal Navy.

The French fleet limped back to its home port of Brest in Brittany and was blockaded there until the French Revolutionary Wars finally ended in 1802. The defeat inflicted severe damage on the prestige of the French Navy in the eyes of the country’s military command and led to a gradual decline that culminated in comprehensive defeat at the Battle of Trafalgar in 1805.

Admiral Lord Graves (1725-1802) came from a distinguished naval family and saw long service although his career was characterized by a mixture of poor judgment and bad luck. He was court martialed in 1756, during the first year of the Seven Years War, for failing to engage the enemy, reprimanded and sent 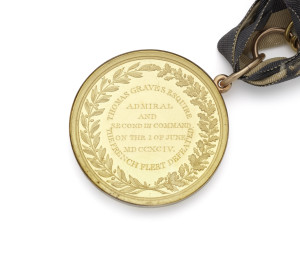 to Newfoundland to shepherd shipping convoys from Britain to Canada.  He saw action during the American War of Independence but his defeat at the Battle of Chesapeake in September 1761 proved disastrous and led directly to the surrender of Lord Cornwallis to George Washington at Yorktown. This was the decisive event of the war and effectively brought it to an end. A violent storm the following year off Newfoundland destroyed Graves’s fleet and two captured French ships with a total loss of 3,500 men.

The medal is being sold with seven log/letter books charting Graves’s career and a Lloyds presentation trophy in the form of a twin-handled silver-gilt cup in recognition of the Admiral’s gallant conduct on the ‘ever memorable 1st of June 1794’.