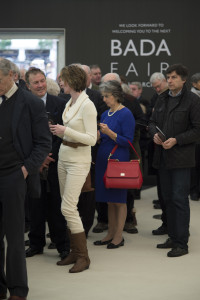 The organisers of this year’s BADA Fair 2016 said that it has been a huge success with record crowds at the purpose-built pavilion at Duke of York Square in London. Over 3,000 visitors attended the Fair on the opening day with collectors, museum representatives, art professionals and interior designers travelling from as far as Russia, the United States, Japan and New Zealand to attend.

The Fair brought together 100 of the country’s leading fine art and antique specialists with exhibitors reporting strong sales from the many exceptional contemporary, modern and traditional pieces on display. 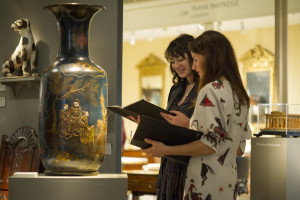 Marco Forgione, BADA CEO commented, “There were some amazing deals done over the course of the week and I was particularly pleased to see a number of first-time exhibitors being successful. I was delighted by the number of new visitors that were attracted to the Fair this year and we received a great many compliments about the updated look and feel to this year’s event.”

The 24th edition of the BADA Fair saw a number of fresh initiatives introduced, including a new design which was praised by exhibitors and visitors alike, both for the striking frontage, as well as the elegant monochrome colour scheme of the marquee interior. This year the opaque marquee ceiling gave an 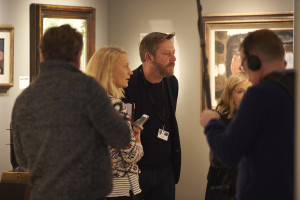 atmospheric feel, and allowed exhibitors to use lighting on their stands to compliment the quality and craftsmanship of the fine art, design and antiques on display.

Antique furniture and objects continued to fetch six figure sums, with disciplines including Asian art, rustic furniture, clocks, jewellery and porcelain enjoying particular success. This year has also seen a growing selection of modern pieces available at the fair, showing a great demand for artist’s textiles and sculpture. This is in addition to a rise in contemporary paintings and ceramics, which have also achieved impressive sales results.

Notable sales across various fields at the Fair included:

Asian Art
• Gibson Antiques sold a pair of Chinese “Rose-Famille’ porcelain soldier vases and covers dating from the Qing Dynasty with an asking price of £330,000.
• Laura Bordignon had a successful fair selling a number of Japanese works of art from the Meiji period to young first-time buyers. 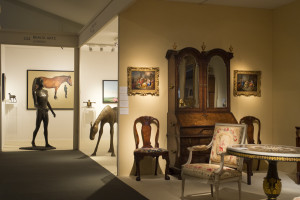 • Godson & Coles sold a George II period carved mirror in the manner of John Vardy, English c. 1745 for a six figure sum to an English private collector met at the Fair.
• Wakelin & Linfield sold two major items of furniture including a 19th century elm refectory table with a broad, one-piece top, five inches thick and a French Provincial deux-corps in a mixture of burr and wavy ash and elm, c. 1790.
• New exhibitor Beedham Antiques sold a number of pieces including a late Elizabethan walnut armorial plaque c. 1601 as well as the only known Elizabethan splay-fronted glass cupboard of its kind for prices of up to £20,000.
• J Roger Antiques reported a “brilliant fair” and sold several pieces of furniture mainly to new clients, including a George III Pembroke table dating to c. 1775.

Clocks
• Howard Walwyn reported his “best BADA Fair ever” and sold a wide range of items including longcase, lantern and mantel clocks to new and existing clients.
• Tobias Birch had a very positive Fair, making several sales including a mahogany and ormolu mounted mantel clock made by Vullaimy, London c. 1815 for in excess of £30,000. 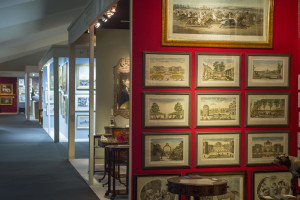 • Jonathan Cooper of the Park Walk Gallery called this “the best ever English Fair.” He sold the largest painting on offer at the BADA Fair, a contemporary work by Ron Kingswood for £28,000 as well as several paintings by Susan Angharad Williams.
• Gray M.C.A. reported a fantastic Fair, and had particular success with a collection of Henry Moore textiles newly released from the Ascher collection.
• New exhibitor Alan Wheatley Art sold a large oil painting by John Piper entitled ‘Aberayon Fields’ c. 1955, as well as a polished bronze sculpture by Bernard Meadows.
• Kaye Michie enjoyed a positive BADA Fair, selling five works by Dame Laura Knight, including one that fetched a five figure sum.
• Guy Peppiatt sold the highlight of his stand within the first couple of hours of opening – a Thomas Girtin (1775-1802) depicting Primrose Hill with an asking price of £24,000.
• Julia Korner Fine Art sold a large-scale watercolour by Thomas Miles Richardson, amongst other works from her exhibition of urban and rural English landscapes.

Ceramics & Glass
• Sylvia Powell Decorative Arts sold three one-off ceramic vases by Jean Cocteau on the opening day.
• W W Warner Antiques have made around 50 sales to new and existing clients, including important pieces of Sevres porcelain.
• Alison Davey at AD Antiques enjoyed a successful fair with a range of sales across both British art pottery and contemporary ceramics.
• Mark West sold eleven Belgian art deco vases, as well as other European glassware from a range of countries and periods.