Two rare British First World War propaganda posters signed by the artist are going under the hammer in Newcastle. 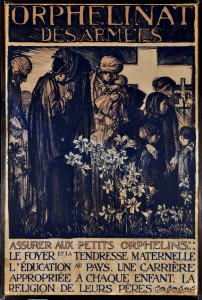 Very few of the Sir Frank Brangwyn posters have survived the intervening century and the two being auctioned at the Anderson & Garland spring Fine Art sale later this month are great examples of the artist’s work.

Although Welsh-born Brangwyn was not an official war artist, he produced posters in support of charities including the Red Cross and the Belgian and Allied Aid League. It’s said that such was the repulsion stirred by his poster of a British soldier bayoneting a German – as an encouragement to buy war bonds – the German Kaiser put a price on the artist’s head.

The two examples being sold in Newcastle were bought by Malcolm Smith in the 1980s.

Mr Smith, from South Shields, said, “I bought them from a friend 30 years ago in London when he was leaving the country. They are big posters and he didn’t have room to take them with him. I think he originally bought them at a Sotheby’s auction.

“I used to have them displayed in the house when I lived in London, but ever since I came back to the North East, they’ve been in the garage.

“I’m not looking at them every day and they’re not being enjoyed. They are such nice posters and they would look good in a grander setting like a restaurant. Leaving them in the garage was a crime; I really think someone should enjoy them.” 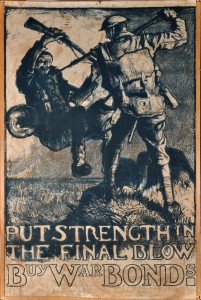 The two posters are especially collectible because they are signed in pencil by Sir Frank, and have an estimated value of £300-£500. Anderson & Garland auctioneer and militaria expert, Fred Wyrley-Birch, said: “A lot of posters were taken down after the war and discarded. Very few survived. Once they’d done their job, that was it – the same way people discard travel, rail and movie posters. These are particularly rare because they have very small signatures in pencil by the artist. We don’t know why he signed them. There is a strong market for militaria in France, Germany, America and Australia as well as the UK.”

In addition to the posters, militaria collectors will also be interested in a Second World War victory flag, produced to celebrate the role of the National Fire Service & Civil Defence. Entitled ‘Thanks for the Victory’, it shows firefighters in the ruins of the Blitz and has an estimated value of £50-£80.

Mr Wyrley-Birch said, “In much the same way that the firefighters of New York were heralded as heroes after the Twin Towers disaster, so was the National Fire Service in London and other cities post-war.

“The flag shows that although they were not at the frontline, they did incredible and dangerous work, which people wanted to thank them for.”