A collection of Nigerian Ibeji dolls and other items brought back from West Africa in the last century sold for more than £2,000 at a tribal art auction at Halls Auctioneers in Shrewsbury, Shropshire recently. 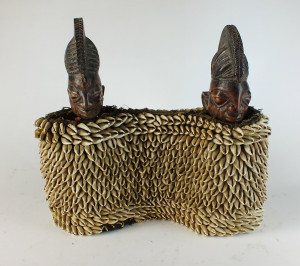 Top seller from the collection, which was consigned by an Oswestry vendor, was a rare pair of Ibeji dolls in large cowrie shell jacket, which sold for £460.

“The collection of eight lots came from an Oswestry vendor who inherited them from a relative who worked and travelled around West Africa in the last century,” said Sam Handbury-Madin, Halls’ tribal art consultant. “They all sold well.”

Top selling lot in the tribal art section was a small 19th century Oceanic Tongan Akau Tau club with a fully carved surface, which sold for £850.

Other notable prices were £220 for a pair of West African decorated copper leg greaves, £210 for two Nigerian Yoruba beadwork panels, £200 for a 19th century Fijian root stock club with a carved tava tava handle and £180 each for a small 19th century Fijian Ula throwing club and an Australia Aboriginal Queensland fluted beanwood shield.

“It is always the older, interesting clubs, which have good provenance, that tend to make good money,” explained Sam. “There are so many variations and styles from the different Pacific Islands.

“The most valuable are those carved by people using stone tools and shells and there are collectors who only buy certain types of Polynesian and Oceanic clubs. They were not only used as weapons, but also as status symbols and in dance rituals.

“They were probably among the first things brought back by explorers like Captain Cook and an extremely rare Polynesian war club could be worth in excess of £20,000.”

“Tribal art in the UK has been somewhat of a neglected area but it is definitely growing with more people taking an interest, particularly on the Internet,” He said. “The main collectors tend to be in Northern Europe but there are also collectors in Australia and New Zealand who are keen to repatriate 19th century and early 20th century pieces.

“Tribal art is normally inherited from relatives who have lived and worked abroad. Some may have been missionaries who travelled the world and brought back pieces. I have even come across the odd piece that has been left wrapped up in the attic of a house or bought in a shop or at car boot sale.

“Often the owners have no idea of the current market value of their tribal art. I am looking for non-European tribal art and artefacts and the older the better.”