A Bible dating back to the reign of Elizabeth I, and originally owned by her High Sheriff in Gloucestershire, sold for five times its estimate at an antiques auction at Moore Allen & Innocent in the Cotswolds last week. 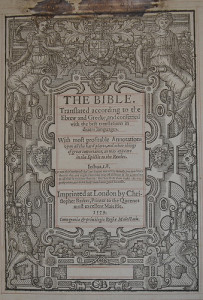 The 1579 Bible, which was published by Christopher Barker, the official printer to The Virgin Queen, had been expected to achieve between £500 and £800 when it went under the hammer at Moore Allen & Innocent’s selected antiques sale in Cirencester on Friday, April 1st.

But considerable interest in the lot before the sale led auctioneers to suspect it would perform well – and after the competitive bidding auctioneer Philip Allwood brought the gavel down at £2,500.

According to an inscription inside the first part of the five-volume Bible, it was originally owned by George Huntley, who held the post of High Sheriff of Gloucestershire in 1599. Huntley’s signature was contained inside.

The Victorian descendant of Huntley had the covers of the five volumes bound in red velvet and housed them in a leather-bound box in the manner of a larger Bible. 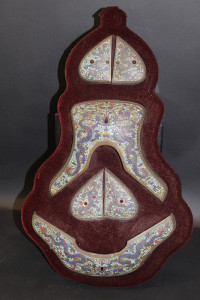 It wasn’t the highest lot price of the sale, however. That title went to a suite of six 19th Century Chinese cloisonné panels, possibly ceremonial armour, each set with red stones, mounted on a red velvet panel measuring 65cm x 41cm.

Auctioneers set a modest £400 to £600 for the unusual lot, which ended up making ten times the lower estimate, which a winning bid of £4,400. 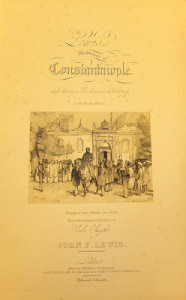 Bidders were attracted to the books because they contained their original, large illustrated plates. There was further interest in the Roberts book because the original owner – Richard Hungerford Pollen Bart – was a subscriber to Roberts’ books, which paid his passage around the Holy Lands, and accompanied the artist on his travels. 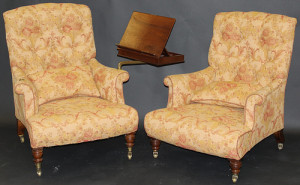 A Howard button back armchair with mahogany reading slope on a brass arm, which was one of a pair, achieved £3,000 – the top price in the furniture section.

Elsewhere in the section, a William & Mary walnut oyster veneered chest of drawers achieved £3,000 against an estimate of £2,000 to £3,000, while an early 18th Century walnut cabinet on stand, two oyster veneered and marquetry inlaid doors depicting exotic birds amongst foliage, attracted a winning bid of £2,000 despite being in need of restoration.

In the pictures section, an 1878 oil painting of a pig, Prize White Sow in a Rural Landscape, by livestock artist E S England achieved £3,000 against an estimate of £300 to £500 because it was in need of significant restoration.

A large collection of modern jewellery also performed well, in particular a white gold, ruby and diamond suite of jewellery, including a necklace, bracelet and pair of ear studs, each made up of clusters set with a central ruby within a band of diamonds, which achieved £2,800, and a pair of brilliant cut diamond cluster ear studs, each approx 1.5ct, which achieved £2,300.

In all, more than £200,000 worth of antiques were bought at the auction, which the auctioneer said was a record for recent years.