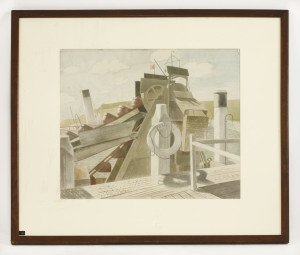 Sworders recent inaugural Modern British Art sale saw the Eric Ravilious watercolour, The James’ and ‘The Foremost Prince’ achieve one of the highest prices by the artist at an auction outside London. The 1934 watercolour eventually sold for far beyond its estimate of £40,000-£60,000 to gain a hammer price of £85,000.

The winning bid came from a private buyer in Sussex who beat off competition from a number of London dealers.

The painting measures 50 x 58cm and comes with a provenance once placing it with the Zwemmer Gallery. It also appeared in the 2003-4 Imperial War Museum exhibition in London, ‘Eric Ravilious: Imagined Realities, A Centenary Exhibition’, celebrating his work as a war artist – he died in a plane crash off Iceland aged just 39 in 1942.

The Stansted Mountfitchet sale took place close to the Essex village of Great Bardfield where Ravilious lived from the early 1930s and was a key figure in the well-known artistic group that was centred on the village. 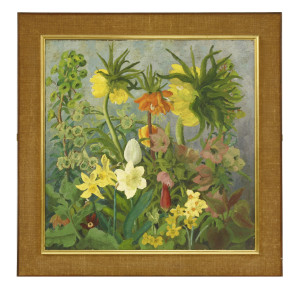 Another work that gained attention at the sale was a Cedric Morris (1889-1992) oil entitled Easter Bouquet. The 1934 painting features a vibrant bouquet of flowers. Measuring 2ft 1in (64cm) square, the oil on canvas was signed by the artist and was exhibited at The National Gallery of Wales, Cardiff in 1946.

A number of bidders competed to secure the painting, with the winning bid outstripping the pre-sale estimate of £20,000-£30,000, as the hammer fell at £49,000. The sale price was one of the highest achieved for the artist.