This year’s spring Decorative Antiques & Textiles Fair in Battersea Park that runs from 19th to 24th April coincides with the 90th birthday of H.M. The Queen on 21st April. Organisers have asked exhibitors to bring relevant regal objects to the Fair.

Here’s a taster of what visitors to the event will see with a distinctly royal flavour. 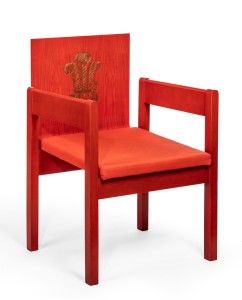 A 1969 Prince of Wales Investiture chair by Snowden. The chair will be on display by new exhibitor Stephanie Connell, who is sharing space with Luke Honey Ltd. 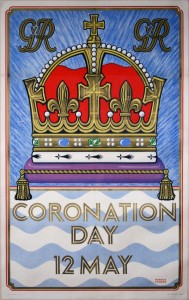 Lithographic printed, designed by Harold Stabler (1872-1945), printed by Baynard Press, conservation linen-backed, the poster is 63.5cm x 101cm (to linen add approximately 2.5cm each edge) and priced £700. Harold Stabler was a designer, ceramic artist and metalwork designer.  During the 1920s, together with his wife Phoebe, he joined forces with potters Truda & John Adams and the Carter family to form ‘Carter, Stabler, Adams’, the ceramic manufacturing company that later became ‘Poole Pottery’. 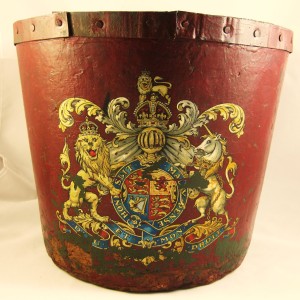 Harold Stabler produced poster designs for London Underground from 1923-1937. He was a founder member of the Design & Industries Association along with Ambrose Heal and Frank Pick. A copy of this poster is included in the London Transport Museum collection.

Duveen Art & Antiques will be bringing a 19th century leather fire bucket (left) with Royal coat-of-arms. Inside pitched to render water-tight. Original decoration. These rarely survive in such overall good condition as they were practical objects, although in this case finished to a high standard due to its planned residence. Superb as decorative object especially by a fireplace, its height is 25cm and diameter 30cm. £450. 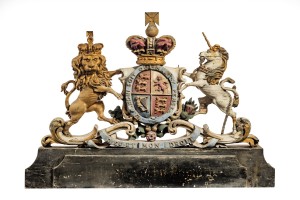 David Levi Antiques will display an English carved wooden Royal armorial (right), from the early 19th century. A great size (141cm wide x 102cm tall), the piece would most likely have been located above a shop, coaching inn or hotel. Feint trace of text on the black base reads ‘Patronised By Royalty’. The piece is priced at £8800. 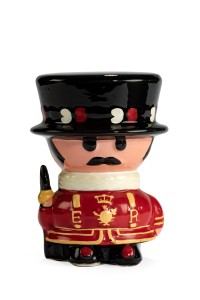 L&V Art & Design is bringing this cute little Beefeater (left) from the 1970s. A novely money box in ceramic, it is priced at £150.