Tennants is selling the residual contents of the Durham County Club, as part of their Country House Sale on 13-14 May 2016. 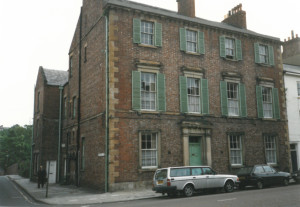 The contents of the Club will comprise between 70 and 100 lots and will include items which illustrate the Clubs 125-year social history. These range from dinner services and glassware used for formal dining, to hunting prints contemporary to the Club’s formation. A wooden bench made from the original choir in Durham Cathedral will be in the furniture section and prints of members of the Royal Family, who visited the Club throughout its history, will also go under the hammer.

The club was formed in 1890 when a number of gentlemen living in Co Durham felt there was a need for a County Club in the City of Durham.  Eighteen of them formed a provisional committee and succeeded in securing, at a moderate price, 52 Old Elvet, a mansion with grounds leading down to the River Wear.  The house had been occupied by Anthony Wilkinson Esq. The provisional committee and other gentlemen subscribed the sum of £4000 for the purchase.

During its time the Club formed a close bond with the Durham Light Infantry now part of The Rifles and has on many occasions entertained its officers. The Crown Court Judges have been members of the Club and used it for their lunches and the High Sheriffs have for many years used the Club to entertain their guests at their annual luncheon.

A committee spokesperson comments, “In recent years the use of the club has fallen, business and professional gentlemen are today only able to take lunch breaks on special occasions. The Club committee sadly had to inform members that the Club’s only option was to close and that the Club premises and contents would have to be sold, other than items requested by the Durham County archivist.”